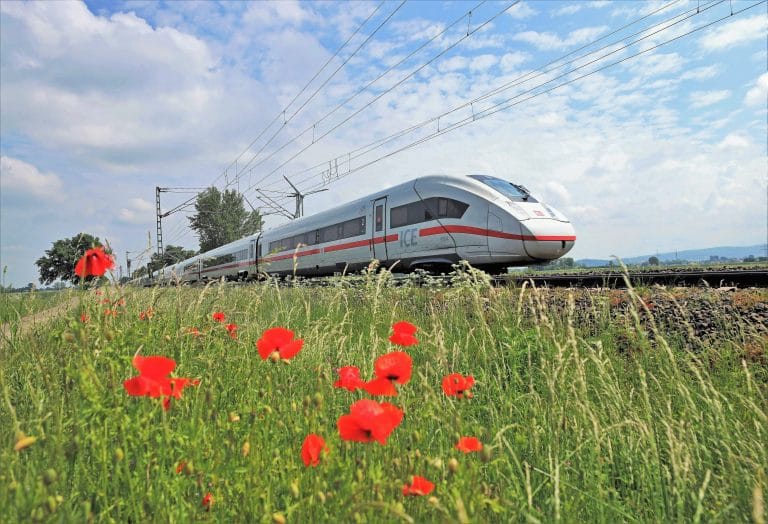 Deutsche Bahn has set itself the ambitious goal of becoming climate neutral by 2040.

Over the 45 years to 2016 Australia’s rail freight has increased more than 10-fold to 414 billion tonne kilometres, largely influenced by the growth of bulk commodities such as iron ore and coal.

However, the Bureau of Infrastructure, Transport and Regional Economics has recently concluded “that apart from commencement of new services via Inland Rail, there are few other obvious opportunities that might significantly increase rail freight volumes” in the future (Research Report 152).

It predicts the growth of freight movement by rail to significantly slow over the coming decades, with forecast growth of only 16 per cent to 2040. In contrast road freight volumes are projected to grow by around 56 per cent.

Every day more than 2000 trucks travel the Pacific Highway between Sydney and Brisbane. Road freight has benefited from significant interstate road upgrades and various micro-economic reforms.

“The European Union has encouraged mode shift to rail using a combination of policies including incentives for freight shippers to choose lower carbon modes and investment in better rail infrastructure and improved intermodal connectivity,” Keogh said.

“This blend of targeted measures could similarly serve as a model for Australia.

“Global rail operator, Deutsche Bahn, moves more than one million tonnes of goods by rail every day. Its competitiveness with road transport is maintained through investment in high technology intermodal “MegaHubs”, use of new techniques such as transport of whole trucks or truck trailers by rail (roll-on roll-off or lift-on lift-off) and investment in zero emissions solutions to meet the objectives of the European Green Deal.

Keogh said Deutsche Bahn has set itself the ambitious goal of becoming climate neutral by 2040, which has precipitated a focus on eliminating diesel vehicle emissions.

“We are conducting pilot projects with low and zero carbon locomotive technologies including battery-powered trains and use of synthetic fuels,” he said.

“In our advanced TrainLab, for example, we are testing eco-fuels such as hydrotreated vegetable oil (HVO), which are produced exclusively from residual and waste materials of vegetable and animal fats. We are also fast-tracking hydrogen-powered trains that will play a major role in replacing diesel locomotives around the world.

“Deutsche Bahn has also developed a ground-breaking simulator to assess the comparative performance of different zero-emission technologies – electric, battery and hybrid options – and identify the best technical solution for clients.

“The Eco Rail Simulator has been instrumental in helping Deutsche Bahn’s client, Vale, the world’s largest producer of iron ore and a major heavy rail operator, to determine the best low carbon rail technologies that will help the company achieve its carbon reduction commitments.”

Keogh said that in Australia, the inclusion of clean hydrogen as a priority technology in the Federal Government’s Low Emissions Technology Roadmap is a good first step to encourage investment in developing and scaling-up hydrogen as a clean fuel for heavy transportation.

Ultimately, the funding and investment decisions that governments make now will determine how successful we are in limiting emissions 20 years down the track.

“Rail is one of the most environmentally friendly ways to move people and goods,” he said.

“Rail industry participants need to enhance this increasingly important competitive advantage by exploring the applicability of global technological, policy and operational initiatives to the Australian context.”