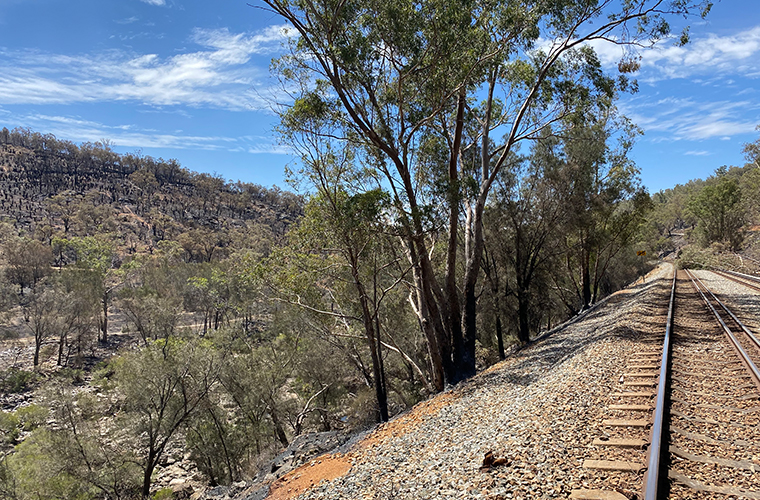 The Wooroloo fire in WA took its toll on the rail sector, but a key rail freight network operator says the recovery occurred swiftly

The fire forced the closure of a 6km section of track from Midland to Toodyay West on the main interstate line on Monday 1 February, the Eastern Goldfields Railway (EGR), under advice from the Department of Emergency Services (DFES).

The Midland Railway (MR) was also closed as a precaution between Muchea and Millendon Junction on Tuesday 2 February, with the impacted section of EGR reopened on Sunday 7 February.

The Muchea to Millendon Junction section of the MR was unaffected and was therefore available for services from Saturday 6 February.

“Throughout the line closures Arc worked closely with customers on their contingency plans to ensure critical food and supplies could travel into Perth via road,” Mr Smith said.

“Due to the amazing efforts of DFES over the course of the week, Arc was given clearance to access the corridor on Friday 5 February for an initial run-through. The following day our teams fully inspected and cleared the corridor and ensured any damaged or dangerous trees that may have been hazardous to operations were cleared.”

Mr Smith said the Arc team was pleased with how well the rail corridor and infrastructure stood up to the fires.

“Our recent program to replace overhead power lines with solar alternatives meant that the railway’s main power supply was unharmed and expedited recovery efforts,” he said.

Arc Infrastructure had more than 40 employees and their families impacted by the fire with some needing to evacuate.

The company says it will continue to support those employees during the recovery.

“Arc had patrollers complete a final check on the affected lines prior to reopening and identified no issues as a result of high winds and rain overnight,” Mr Smith said.

Arc Infrastructure technicians were also at active level crossings during the fires as an extra precaution.

“We thank our customers for their patience, cooperation and understanding over this past week,” Mr Smith said.

Arc has expressed its gratitude to DFES in getting the bushfire under control, and for their collaboration and support with getting the railway back open sooner than anticipated.

Arc Infrastructure has also donated $10,000 to the Lord Mayor’s Distress Relief Fund to help victims of the bushfires in the City of Swan and Shire of Mundaring.