While Queensland has enjoyed significant population growth in recent years, nearly 90 per cent of that growth has occurred within South East Queensland (SEQ). This region is expected to further increase its population by around 1.5 million over the next twenty years.

Cross River Rail will address a major bottleneck within this region. As such, it is Queensland’s highest priority infrastructure investment and the government has allocated $5.4 billion towards the project.

Currently, there is only one crossing over the Brisbane river and just four inner-city stations. Cross River Rail will unlock the bottleneck by providing a second river crossing, therefore doubling the capacity of the network and allowing more trains to run more often, as well as integrating with roads and bus services to enable a turn-up-and-go public transport system across the whole of SEQ.

The project incorporates a 10-kilometre rail line from Dutton Park to Bowen Hills, which includes 5.9 kilometres of twin tunnels under the Brisbane River and the CBD, with four new underground stations. A new European Train Control System (ETCS) signalling system is also being delivered to improve safety and assist in managing capacity constraints in the network. Numerous station upgrades between the Gold Coast and Brisbane and three new stations at the Gold Coast end the network are also planned.

According to Lynch, early works have now been officially completed, though these are relatively small in the overall scheme and context of the project. 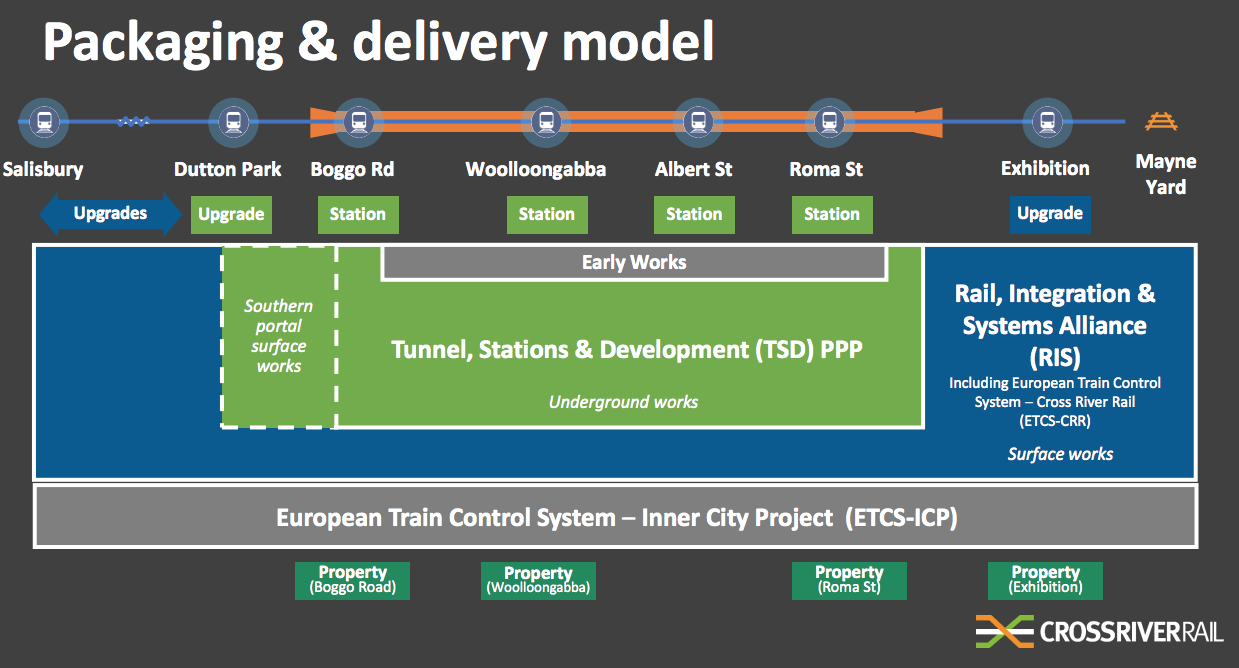 “Our procurement processes are essentially complete as of the end of October, and construction is now underway across all three packages, with 4 to 5 years of construction and commissioning ahead,” Lynch said.

“All major work sites have now been handed over to the contractors.”

The mammoth project will be delivered under three major infrastructure packages of work: the Tunnel, Stations and Development (TSD) public-private partnership (PPP); the Rail, Integration and Systems (RIS) alliance; and the European Train Control System (ETCS). 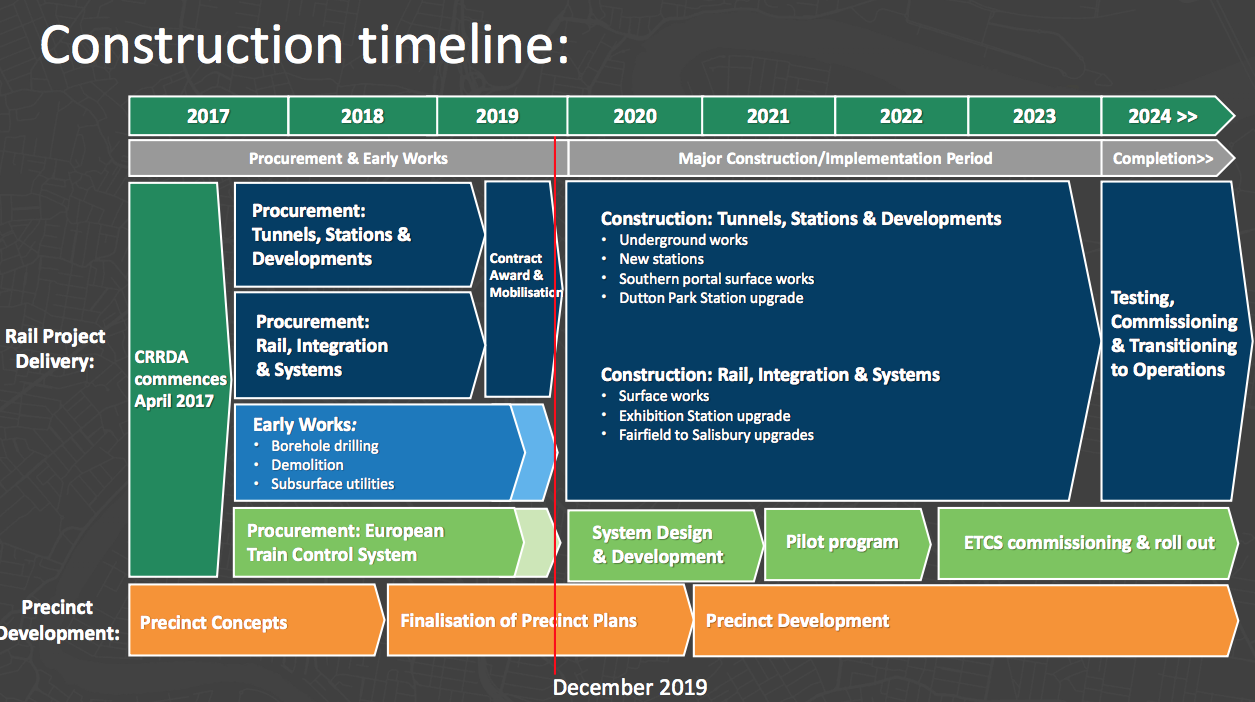 The TSD PPP will deliver the underground section of the project, including the tunnel from Dutton Park to Normanby and the construction of four new underground stations. It includes all associated mechanical, electrical and safety systems, such as vertical transportation for passengers at underground stations, and above and underground track work, the tunnel portals and dive structures, traction power systems and selection rail operation and control infrastructure. The package also includes a property development opportunity above Albert Street station.

It will be delivered by the PULSE consortium, led by CIMIC Group companies: Pacific Partnerships, CPB Contractors, and UGL with international partners DIF, BAM and Ghella.

The RIS alliance will deliver the design, supply and installation of the supporting rail system, including rail civil and electrical works, rail operation systems and controls, as well as rail signalling and communications work. The alliance will also deliver accessibility upgrades to six suburban stations. The alliance will be responsible for the integration of Cross River Rail into Queensland Rail’s train network.

The ETCS signalling system will be introduced to enable increased capacity on the network. It will be rolled out over several stages starting with a pilot program on the Shorncliffe Line in 2022 with early works commencing in late 2019. As part of these early works, trains and tracks will be fitted out with ETCS equipment which sends continuous data about the position, direction and speed of trains and enables the system to calculate a safe maximum running speed for each train.

The ETCS will be delivered by Hitachi Rail STS, including Hitachi, Ansaldo STS and Systra. 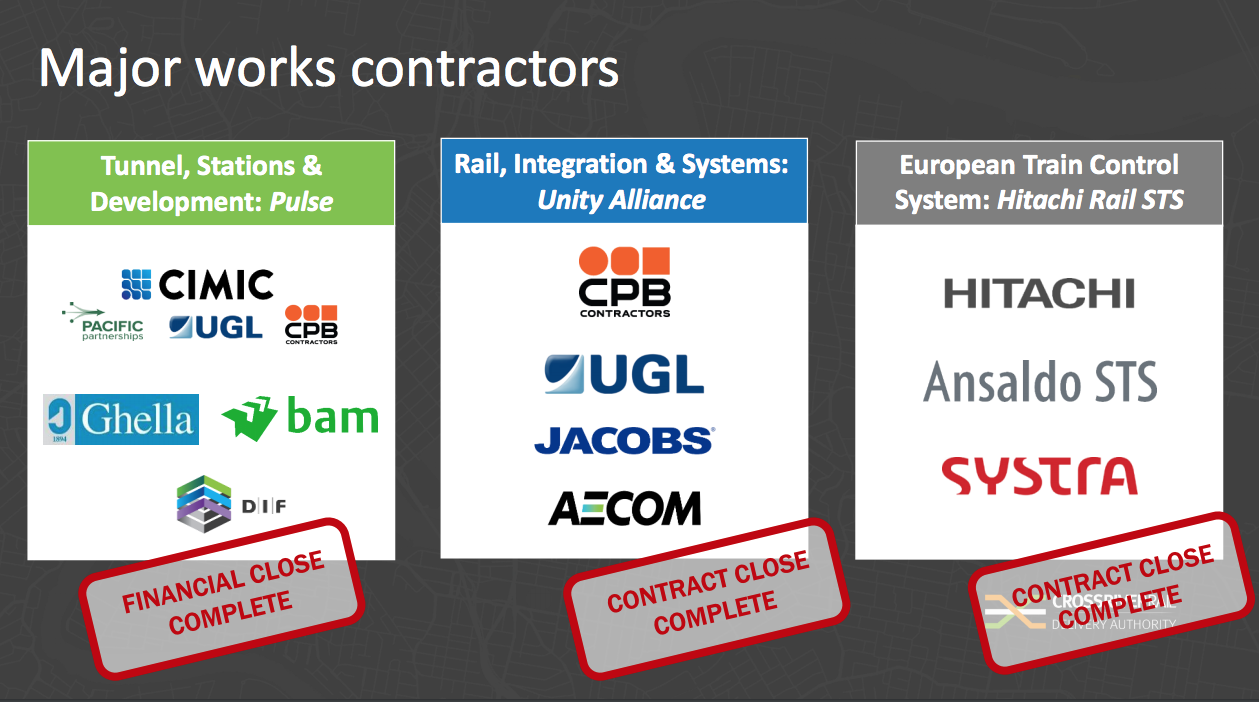 A major component of the way in which Cross River Rail is being delivered is Project DNA, what Lynch explains refers to the CRRA’s Project Digital Network Approach.

“It is a complete digital twin of the Cross River Rail project. Now, we are currently working in the space of 3D and 4D, but developing additional dimensions as we move forward.”

The approach was inspired by lessons learnt from other projects, “where it’s been identified that having a fully integrated and holistic model very early in the process would have been of great advantage.”

Lynch explains how the digital twin was developed, “where previously we built separate systems and models, here we’re using a common data environment.”

“Essentially, it is one model with multiple applications to be used by multiple teams, so whether in the space of project delivery, program controls, communications and engagement or future precinct and planning and delivery, we’re using the one integrated model.”

“The approach we took to this was actually to develop this model before contracts were awarded.”

The model is built in three layers according to Lynch, the first being the Building Information Modeling (BIM) at the core of the model.

“The second layer gives us geographic information system (GIS) mapping, which enables us to move from the 2D into the 3D environment, while the third layer uses the unreal gaming engine to provide an interactive and virtual reality experience.”

The collaborative approach enabled by Project DNA helps in the design, construction, management and operation of the assets built, says Lynch. It will also improve the on-time and on-budget delivery of the project.