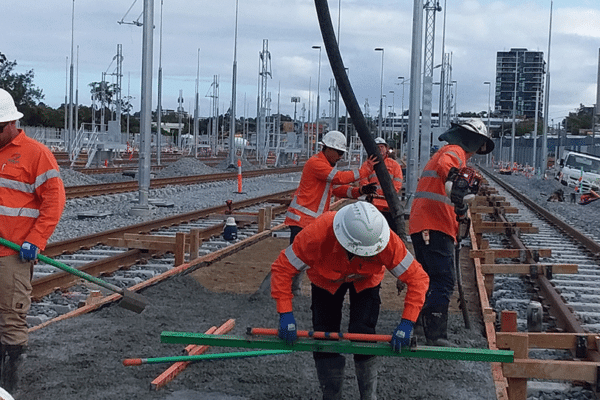 Known as eMesh, the innovative material is more sustainable, safer and cost-effective than typical steel reinforcement used on large projects, as it requires less effort handling and cutting.

The eMesh fibres, each about 47mm long and 1.7mm wide, act as mini reinforcing bars mixed throughout the concrete.

In fact, a standard eMesh concrete would have more than 120,000 fibres in every cubic metre.

The material is made from 100 per cent recycled Australian plastic waste, and can even be reused again in the future.

The specific material used, polypropylene, is the second most widely used plastic in the world and has the lowest recycling rate – estimated at below one per cent.

Polypropylene is one of only three types of plastics that floats, forming a huge part of the estimated eight million tonnes of plastic entering the ocean each year.

And in an added bonus, Fibrecon, the company behind eMesh, uses National Disability Insurance Scheme (NDIS) workers to pack the concrete fibres, supporting about 90 jobs.

There are plenty of other examples of Cross River Rail’s commitment to sustainability and recycling, including the use of sand made from recycled glass.

Also, more than 80 per cent of the spoil generated on the project so far has been reused or is being stockpiled for reuse.

One of the more interesting uses is at Austral Bricks at Rochedale, which is using 60,000 cubic metres of Cross River Rail spoil to make bricks for houses.