The development will facilitate the introduction of much-needed container rail shuttle service between Port Botany and Western Sydney. Once up and running, it will compete directly with Qube’s Moorebank Logistics Park for Sydney’s container volumes.

Speaking exclusively with Rail Express, Pacific National CEO Dean Dalla Valle says the proposed St Marys Freight Hub is a unique opportunity not only for Pacific National, but for the freight and logistics industry as a whole.

“The proposed St Marys Freight Hub is located within Sydney’s biggest catchment area for many of the country’s largest national distribution centres and warehouses which service Western Sydney – one of the most populous and fast-growing regions in Australia,” Dalla Valle says.

“Our St Marys proposal aligns perfectly with the NSW Government’s freight and ports plan to establish a network of intermodal freight terminals in Greater Western Sydney to help drive modal shift from road to rail – thereby helping to ease traffic congestion – and facilitate the operation of efficient port shuttles to and from Botany.

Sitting within a large 43-hectare site, the freight hub’s 10-hectare footprint fronts Christie Street, Forrester Road and Lee Holm Road in St Marys and is a stone’s throw from the M4 and M7 motorways and Great Western Highway. Importantly, the site provides direct access to the T1 Western Rail Line allowing for a 58-kilometre shuttle run between Port Botany.

Works planned to get the hub up and running include upgrades to rail sidings, construction of hardstand areas for container laydown and storage, and rail and vehicle loading and unloading areas. Terminal facilities like a wash bay and forklift repair area, an office building, a fuel storage area, a container shed, parking for staff and visitors, heavy vehicle bays, and reach stacker and forklift parking bays are also slated for construction.

At this stage, Pacific National expects three to four 600-metre trains between Port Botany and St Marys each day. “A single port shuttle freight train equates to taking 40 B-double trucks off Western Sydney’s already heavily congested motorway and road network,” Dalla Valle says. “Rail has become a much more viable option to freight importers and exporters due to the improved efficiencies and technology that has made the rail business more cost competitive.”

Dalla Valle says a modal shift will be imperative to sustain market demand and growth in the region, while bringing some respite from the enormous pressure on Sydney’s heavily congested road networks, particularly between Port Botany and the rapidly expanding cities of Paramatta and Penrith.

“Rail transportation offers a competitive and economic solution transporting imported containerised freight from port to freight hubs within 90 minutes,” he says. “With up to five train services each day, Pacific National will rail a total of 300,000 containers between Port Botany and St Marys each year, removing between 70,000 and 80,000 trucks from Sydney’s busy road network.

“It will on average reduce truck travel distances by 29,000 kilometres each day or 10 million kilometres each year, notably on the M4 and M7 motorways and Great Western Highway.” 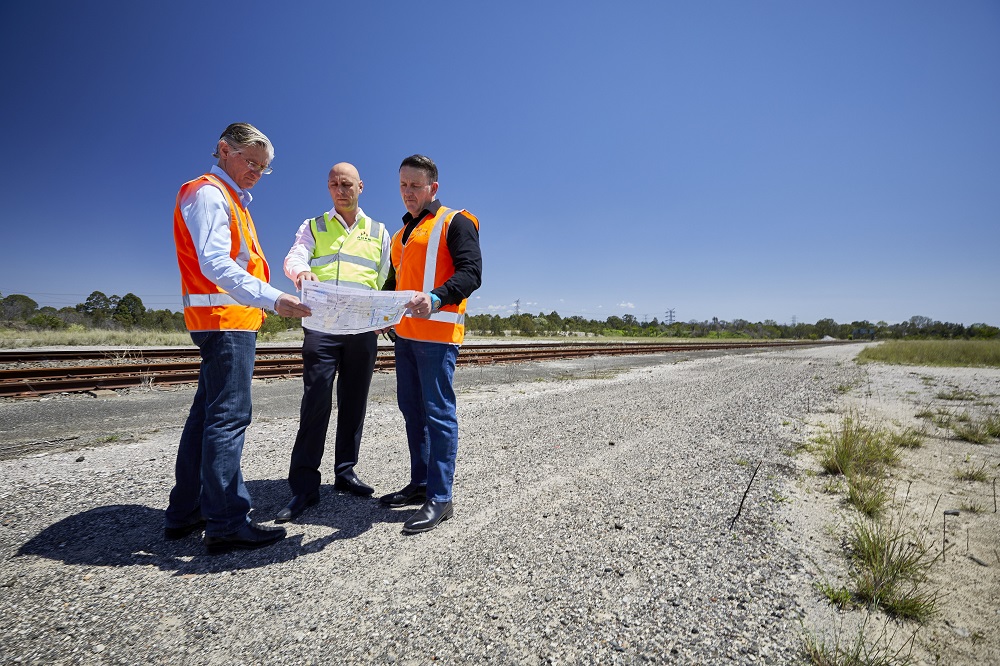 That type of shift will be even more important, Dalla Valle notes, as Sydney’s population grows from its current mark of around five million, to the forecast eight million over the next 40 years.

“Demand for freight services will only continue to rise and improving rail freight operations is the only solution to unlock productivity and to meet the growing demand for services,” he says.

Development on the waterfront will be critical to effective growth as well, Dalla Valle notes. Patrick – the stevedore that once shared a parent company with Pacific National – recently became the first Port Botany terminal operator to have funding committed by NSW Ports for improved rail access. The port ownership group has committed to similar projects at the Hutchison and DP World terminals at a later date.

“Port infrastructure investment is imperative to maximise throughput at Port Botany and to ensure that NSW import/export gateways flow with the least resistance and are not constrained by inadequate systems or imposed inefficiencies,” he says. “NSW Ports are playing a critical role liberating capacity through investment in rail and port infrastructure and this is a very positive step in achieving the NSW Government’s plan to create a network of intermodal freight terminals in Western Sydney, to increase rail freight volumes and improve supply chain efficiencies to accommodate growth and improve export capability for NSW.”

Dalla Valle embracing role Dalla Valle, who before joining Pacific National spent forty years at BHP Billiton, including as its President for Coal and its Chief Commercial Officer, has fully embraced his role as an advocate for rail since joining the operator in May 2017. He is the chair of the Freight on Rail Group (FORG) of Australia, an industry body which also includes operators Aurizon, Genesee & Wyoming Australia, Watco, Qube, and SCT Logistics, along with the ARTC and Arc Infrastructure.

He issued a clear and decisive statement in that role ahead of a meeting of Australia’s transport and infrastructure ministers last November.

“To develop polices to deliver new innovations and efficiencies, the rail freight sector is simply asking for an equal policy playing field,” Dalla Valle said. “This can only be achieved by a new era of closer collaboration between government agencies, which regulate rail networks, and private companies which operate on those networks.”

He said it was concerning government policies were geared towards helping roll-out heavier and longer trucks at a time when Australians want safer roads and less traffic congestion.

“As a case in point, the National Heavy Vehicle Regulator recently approved the roll-out of a 105-tonne 36.5-metre B-Quad truck on select routes between Victoria and Queensland. Don’t get me wrong: I see the obvious freight productivity benefits, but how much bigger and heavier do we want trucks on our roads to get? What’s the upper limit?”

Dalla Valle said while the trucking industry had been successful in extracting major concessions in efficiency, productivity and road access, the rail freight industry had become “tangled in nests of technical jargon. As an example, he noted NSW freight train drivers can be subjected to up to 18-months of extra training to operate on a similarly configured rail corridor in another state or territory.

“In stark contrast, a NSW truck driver can move from operating a semi-trailer for a year to handling a B-double or road train in just two days at minimal cost with immediate access to thousands of kilometres of road across every jurisdiction in the country,” he said.

Dalla Valle says St Marys will operate not only as an intermodal hub for Western Sydney, but as an interconnector for the company’s other major NSW development, on the future Inland Rail route in Parkes – a city he says could one day mirror the Northern American freight capital of Memphis, Tennessee.

Parkes, already home to the Elvis Festival and The Dish, will one day be the grand intersection between Australia’s major north-south and eastwest railways. Parkes Shire Council is developing a National Logistics Hub at the junction, and within it, Pacific National is building an intermodal site capable of handling up to 450,000 containers each year.

The terminal is designed to receive freight trains 1,800 metres in length.

“Once the Melbourne to Brisbane Inland Rail project is complete, regional enterprises can use Parkes as the launching pad to haul goods and commodities by rail more efficiently between the ports of Botany, Brisbane, Melbourne and Fremantle,” said Dalla Valle.

In the future, Pacific National’s St Marys Freight Hub will facilitate regional trains from Parkes to be broken into 600-metre port shuttles to better access stevedoring terminals at Port Botany.

NSW Deputy Premier John Barilaro recently moved to establish a ‘special activation precinct’ at Parkes to help streamline development of the National Logistics Hub. Dalla Valle said this was part of a trio of good ideas at play.

“Parkes Shire Council’s National Logistics Hub, the Australian Government’s Inland Rail Project, and the NSW Government’s Special Activation Precinct, three great ideas,” he said. “Companies like Pacific National will have the added investment confidence to help create the largest freight and logistics precinct in inland regional Australia; akin to the major freight hub of Memphis in the interior of the United States of America.”

Pacific National has committed an initial $35 million to develop its Parkes logistics terminal. “Pacific National is proud to be part of Parkes. Terminal construction is currently generating about 40 jobs, while the future terminal will have a workforce of 100 people,” Dalla Valle concluded.