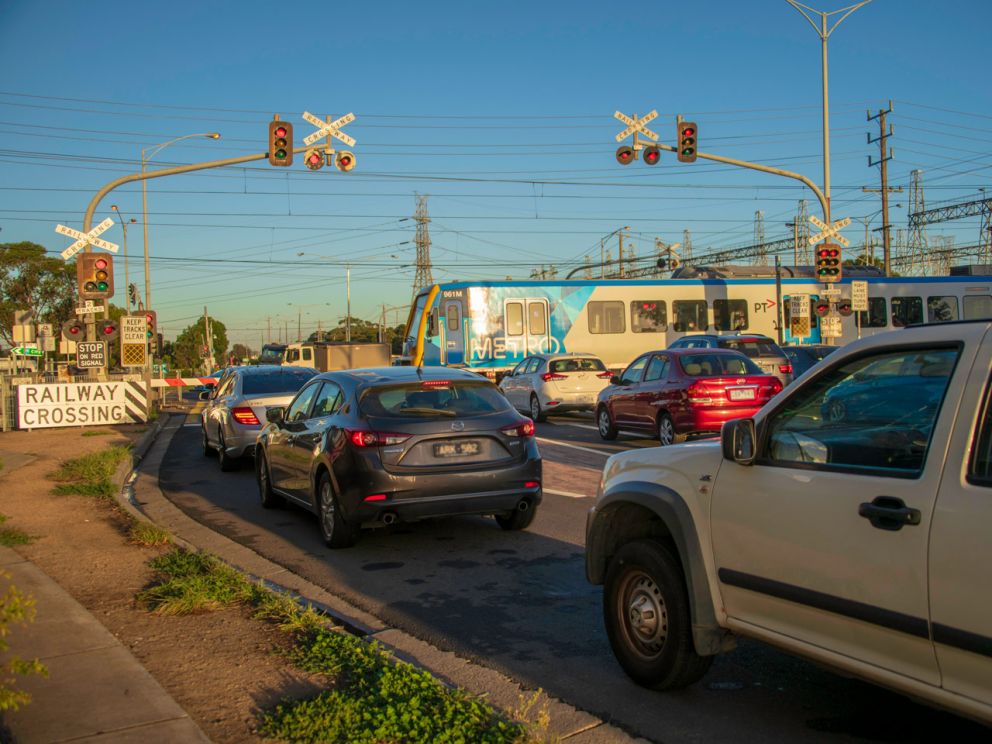 The boom gates down at Keon Parade and traffic banked up at the level crossing.

Communities in Reservoir and Thomastown will soon benefit from a brand-new station and elevated rail bridge over Keon Parade, removing the dangerous and congested level crossing and boosting safety in Melbourne’s north.

Removing this level crossing will also cut travel time to the M80 Ring Road and pave the way for more trains to run on the Mernda Line, more often.

Keon Parade’s boom gates are down for up to 41 minutes during the morning peak, causing significant traffic delays for the 18,000 vehicles that use the crossing each day. Since 2012 there have been 24 near misses and one crash recorded at the Keon Parade level crossing.

An early precinct plan has been released with a 750m elevated rail bridge to take trains over the road and a new Keon Park Station moved to the south side of Keon Parade, delivering safer connections to shops, public transport and local neighbourhoods.

The new Keon Park Station will create an integrated transport hub giving commuters improved connections between train, bus and taxi services with new bus stops, secure Parkiteer bike storage and a pick-up and drop-off zone all within the precinct.

The modern station will have a central elevated island platform accessible via lifts and stairs, with improved shelter, CCTV cameras and better lighting to bolster safety.

The station will provide safer access for Reservoir and Thomastown residents with new local connections, including a new pedestrian crossing across High Street at Hughes Parade.

Despite the narrow rail corridor where the elevated rail and new station will be built, no compulsory acquisition of homes or businesses will be required. A Voluntary Purchase Scheme will be offered to eligible properties impacted by the new station location and elevated rail line.

The project team is currently in the process of contacting residents who have purchased apartments near the location of the new Keon Park Station to discuss the Voluntary Purchase Scheme options.

Over the coming months, crews on the ground will continue with site investigations ahead of early works, which will start at the end of the year. Major construction is scheduled to begin next year, with the station open and level crossing gone in 2025.