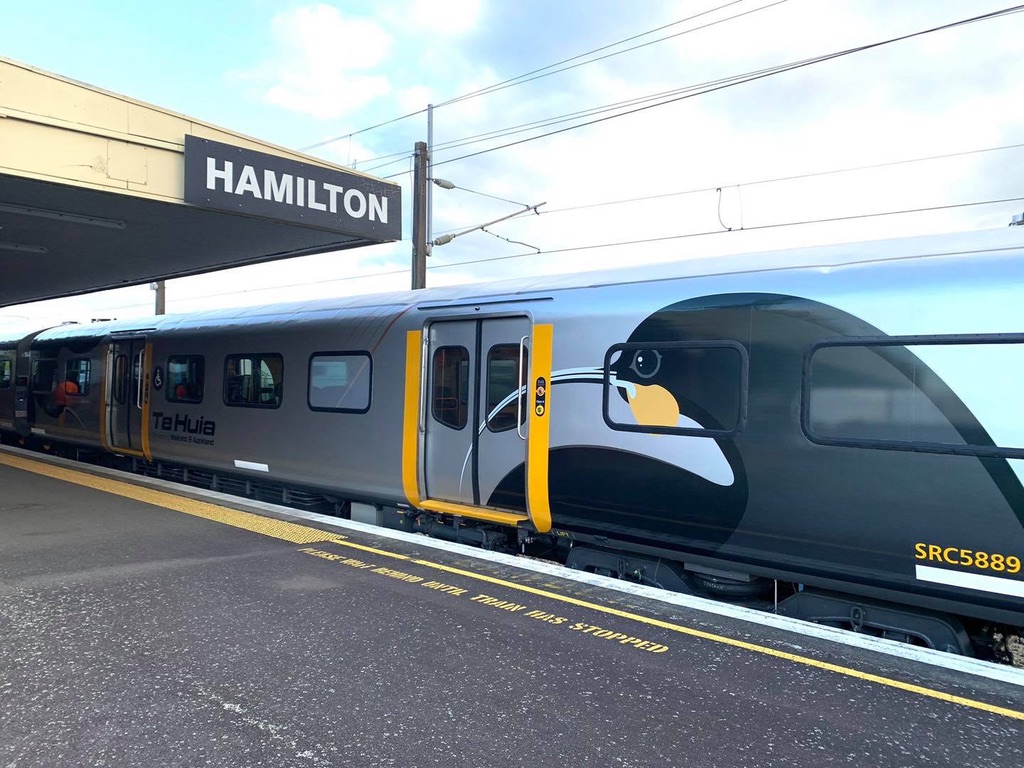 A new locomotive-hauled service will connect Hamilton and Waikato to Papakura, where commuters can change for Auckland metro services.

Operated by KiwiRail, from April 6 two return services will run, targeting commuters. The train will depart Frankton, in central Hamilton at 5.46am and 6.28am and stop at Rotokauri and Huntly. A return service will leave Papakura at 4.42pm and 6.25pm.

Passengers can pay with a Bee Card, a prepaid bus card, or with cash.

“Plenty of work has gone on behind the scenes by KiwiRail too, including training our new onboard crew who will be responsible for hosting passengers travelling on Te Huia. They have been preparing for this day and are raring to go.”

“This service will transform public transport and the way people in the Waikato travel between here and Auckland. There’s real opportunity for us to expand the service into the future, opening it up to even more Waikato communities,” said Waikato regional councillor Hugh Vercoe.

Currently the service will only operate on select Saturdays, however there are plans to increase weekend services once more train paths are available after trackwork is complete.

“The carriages will have free wifi, air conditioning, a cafe, and plenty of tables and power points so people can be productive during their commute,” he said.

“Investing in rail is part of our Government’s plan to help reduce congestion and emissions.”

Waikato District Council councillor Eugene Patterson said the service would have a big impact on the region.

“Te Huia will change the face of public transport in the region by better connecting Hamilton, the Waikato district and Auckland. The newly-built Raahui Pookeka | Huntly Station offers a fantastic opportunity to kickstart the revitalisation of the Huntly central business district.”

Wood was quoted saying that the government was looking at the model for delivering the City Rail Link as inspiration.

“It’s currently the biggest infrastructure project being delivered in New Zealand and that was a bespoke body that was set up to deliver it, taking account of those complexities, taking account of the need to have a relationship between the two sponsors, being the Crown and Auckland Council,” he said.

“We won’t necessarily land on the same form as the CRL but it is an example of the kind of thinking we’ll have to engage in to deliver something like light rail.”

A decision is expected on the project by April. Previous progress on the project was halted in June 2020, when both proposals, one from Waka Kotahi and a private proposal from NZ Infra, were rejected by former Transport Minister Phil Twyford.

During the 2020 election, Labour committed to continuing the project in its second term in government. Following the election, with Labour no longer relying on NZ First, which was sceptical of the project, and governing with the Greens who support the project, further progress is expected to be made.