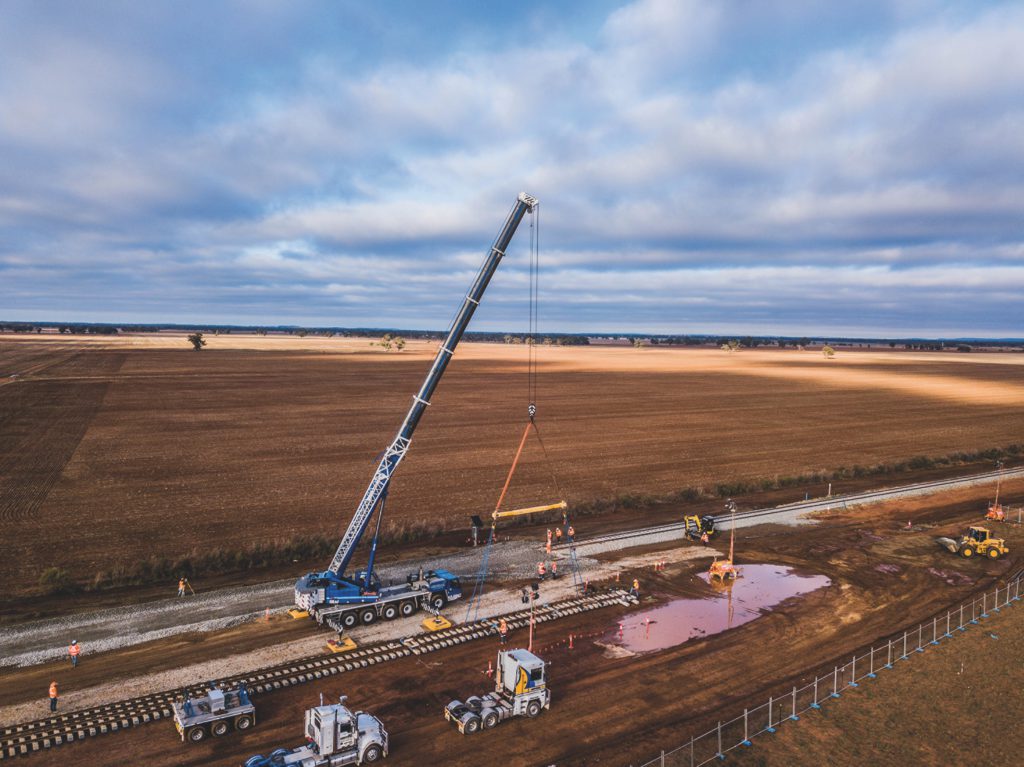 Outgoing Inland Rail CEO Richard Wankmuller talks about the project he says will become an “economic engine” for Australia.

Despite more than three years as Inland Rail chief executive, Richard Wankmuller retains the passion for this ground-breaking piece  of infrastructure.

“What I’m really excited about is, right now, we have a whole bunch of excited stakeholders who really understand what Inland Rail can do for the nation and that it is so much more than a rail line,” he said.

“It has the potential to truly engage the country. In fact, you don’t have to look any further than the deputy prime minister – Barnaby Joyce – and he is very excited about how this project can transform the economy here in Australia and really help bring more revenue into the country and make us     more efficient.”

Richard Wankmuller recently announced he would be stepping down from his chief executive officer role, effective 30 July.

It will mark an end to a crucial period of Inland Rail, from when the project became something real, rather than a mere blueprint. And as construction continues in northern New South Wales, it is in the regions where he believes the project’s true potential lies.

“If you go out to the regions, people are talking about how they can really ‘hook in’ to the network and improve their business,” he said.

“In twenty years, when you look back, I’m going to be excited to look back and see where there are businesses where there weren’t before.”

The idea of decentralising Australia has been a talking point for decades. But the conversation has increased in intensity as the nation grapples with managing a burgeoning population. And while Inland Rail is about moving goods rather than people (although the latter are not ruled out) Wankmuller sees Inland Rail as contributing to this goal.

“I hope we are going to see that Australia is a bit less decentralised than it has been in the past,” he said.

“By having Inland Rail run through regional towns, you can move warehousing out there, you can make product out there and create economic centres.”

Upon taking over as CEO, Wankmuller identified four key aims:

Be clear on how the project would be built

Figure out how to ignite and engage a ‘heated market’.

“I wanted people to really understand what we were on about and provide a realisation that Inland Rail was something much greater than just a rail line,” he said.

“It really represents the economic engine of the country because what it does is give us a more efficient and reliable supply chain and that has all kind of cascading benefits.”

While his North American accent betrays something of his background, Wankmuller is an international citizen having worked across the US, Europe and Australia.

An engineer with management qualifications from Harvard, prior to taking on his role with Inland Rail position, he had performed several high-level roles.

These included three years as chairman of Mercy Ships, a mobile healthcare service focused on Africa.

In taking on the Inland Rail role, his expectation was simple.

“My expectations were to get in and have a good time,” he said.

“I like big challenges. My expectation was, let’s show up and see what we can do.”

Despite being no stranger to federalist environments – for example the US – he admits dealing with three state administrations plus the Commonwealth brought with it some challenges. But the opportunities, he said, were immense, particularly in the area of so-called “modal shift”.

“The demand was already there. It was really just a modal shift – taking freight off the road and putting it onto rail like it is in most developed countries around the world,” he said.

“The rail share on the eastern seaboard was very low – around 20 per cent.

“When you compare that with Canada or the UK or the US, it is the other way around; the rail share is more like 70 per cent. It was really about getting that modal shift and getting freight onto rail,” he said.

Did any aspect of this role come as a surprise? He gives a candid answer.

“I’m not really a rail person. I ran global engineering and construction companies where we did rail jobs but I’m not a rail technical expert. To be honest, some of the complexities of rail surprised me,” he said.

“Rail can be reasonably complex when you think about the big picture.

“I thought it would be straightforward, but there was a bit to learn.”

The Acacia Ridge intermodal in south-west Brisbane is frequently cited as a sticking point for the entire project. But Wankmuller points out there is a rail connection between Acacia Ridge and Port of Brisbane, albeit of the narrow gauge variety.

“There are trains every day going to the port through and on that line; coal trains and agricultural trains and they will continue to do so.

“It is a bit of a misnomer that Inland Rail stops at Acacia Ridge. There is just no need upgrade the line beyond Acacia Ridge to the Port of Brisbane because everything going to the Port of Brisbane is agriculture and minerals or small trains and we don’t need to upgrade the line to do any of that because they are too heavy to double-stack anyway.”

This brings us to another discussion point, that Inland Rail is more about domestic than international markets.

“It is not import or export, it has little to do with the ports,” he said.

“Romantically it is nice to think about imports and exports, but when you have the growth that we have, and you have such a large port facility in Melbourne, you have to get all that stuff around the country.”

“What we have seen in the last few years has really reinforced the need for Inland Rail. What I mean by that is the natural disasters, the flooding, the fires, COVID-19,” he said.

Society requires reliable supply chains to deal with these major challenges, he said.

“When flooding occurs now, it is affecting rail assets that were designed years ago and many were designed computers and they weren’t designed for hydraulic modelling.

“Whereas the state-of-the art that we’re bringing to bear; these are very significant structures and very reliable and will help us withstand the natural disasters and pandemics of the future.”