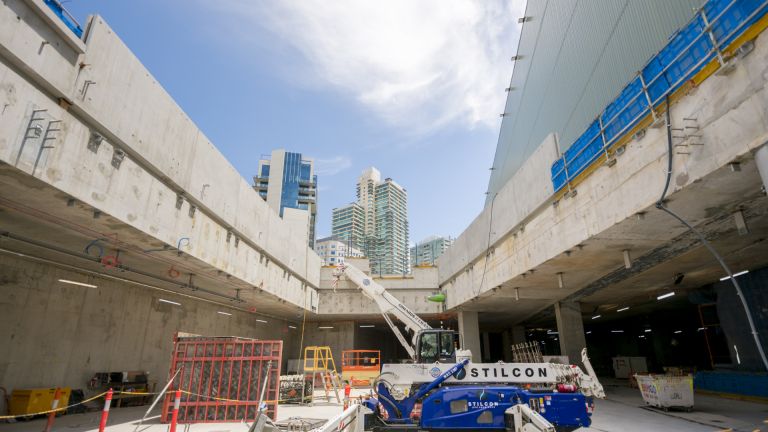 For most Melburnians, five massive sheds dotted around the Melbourne CBD have been the only view of the city-shaping Metro Tunnel Project for the past four years – until now.

This month, crews will start work at St Kilda Road to dismantle the first of the project’s acoustic sheds, which have been used to contain noise and dust from around-the-clock tunnelling and construction at sites including A’Beckett Street, Franklin Street and Swanston Street.

The shed removal will take around six weeks and will reveal the station site’s temporary cover, which consists of a concrete slab and Styrofoam filling. Over the next six months, this temporary backfill will be demolished and removed.

Eventually, St Kilda Road’s tram tracks and traffic lanes will be realigned for the final time over the station, after being twice realigned already as part of the construction plan that allowed the station to be built underground while traffic and trams continued using the road above.

Almost 40,000 people day are expected to use Anzac Station to get to business precincts and growing residential areas, as well as major cultural destinations such as the Shrine of Remembrance, the Royal Botanic Gardens and Albert Park.

Once complete in 2025, the Metro Tunnel will create capacity for more than half a million extra passengers a week during peak times across Melbourne’s train network.