Combilift was established in Ireland by cofounders Robert Moffett and Martin McVicar in 1998. Since its inception it has grown to sell 40,000 units in 85 countries including Australia, which over the last 17 years, has become Combilift’s fifth-largest export market.

“Combilift has set the benchmark for the mass production of customised innovative products,” McVicar, now the company’s managing director, said at the opening of a new 46,500 square metre, purpose-built facility in Monaghan, Ireland in 2018. “Mass customisation is the new frontier for both the customer and the manufacturer as customers are increasingly expecting products to be tailored to their requirements.”

Margins are tight even for Australia’s largest intermodal operators, and for the nation’s midsized regional terminals, this is magnified even further.

“The issue in the market is equipment used to load and unload trains tends to be designed for larger scale operations with a higher capacity,” Jarad Wilson, Combilift’s Straddle Carrier Production Manager in Asia Pacific, explains to Rail Express.

“This level of capital and operational cost can be prohibitive for midsized operators who only need to be able to load or unload one or two trains a day.”

Much of Combilift’s success has been built on the mantra of ‘customer-based innovation’. Wilson says this approach has helped the company develop and refine a pair of products ideal to Australia’s midsized market: the Combi Intermodal Straddle Carrier, and the Combi Xpress Straddle Carrier.

Combi IMSC a real alternative to forklifts and reach stackers

Combilift’s Intermodal Straddle Carrier, or IMSC, was initially designed to respond to a midsized Dutch intermodal terminal, looking to unload trains quickly. “The IMSC design draws on existing straddle carriers, but aims to fill this space in the market,” Wilson outlines.

“This is the only machine of it type currently in the Australian market for midsized operations. It’s a simple piece of diesel hydraulic lifting equipment, without the capital expenditure, and operating and maintenance overheads often required by a higher-capacity product. It fits in a niche space and really suits Australia’s midsized regional intermodal terminals.” 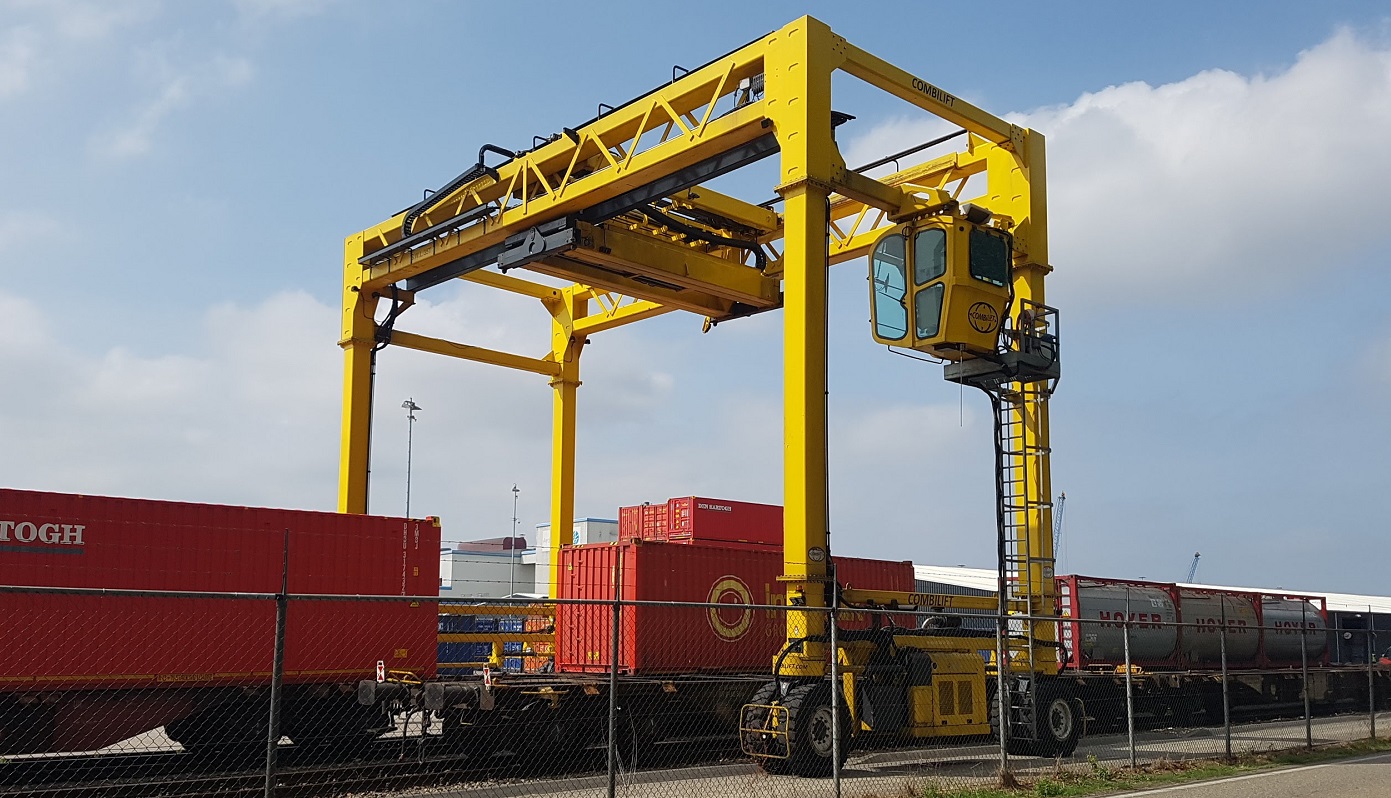 The Combi IMSC in operation over a rail siding.

The IMSC is designed to be ideal for handling containers between a terminal’s rail siding and its storage/transport lane, while offering strategic advantages over a reach stacker or forklift.

“Traditionally in many states reach stackers and forklifts have been used to load and unload rail,” Wilson explains. “These have a very heavy footprint because they’re counterbalanced; they have a very heavy load on the front axle, because the load is positioned out in front of the machine.

“What this means is the pavement and the ground conditions needed when you’re using a reach stacker or forklift for containers has to be very heavy duty. This can mean millions of dollars of excess spending to set up even a midsized operation.”

The rubber-tyred IMSC, by contrast, does not rely on counterbalanced lifting and thus requires a less-heavy-duty pavement on which to operate. Wilson says the wheel load on each corner of the IMSC wouldn’t exceed 30 tonnes during standard operation – roughly a third of what you could expect from the front axle of a reach stacker performing the same task.

“We can help clients service a rail siding with a lot less investment in infrastructure at that location,” he says. “Rather than putting down large areas of reinforced pavement all the way along the length of your siding, this machine allows an operator to perform the same task with minimal investment. Particularly in the regional centres, this very much has a place in the market, and there’s a lot of interest in it.”

Additional benefits of the IMSC include a fully-enclosed driver compartment with air conditioning, positioned high off the ground for excellent visibility.

Wilson says the IMSC is generally lower cost to operate than a forklift or reach stacker due to a lower fuel and service cost. As the machine is lighter and typically performs a straight-line operation along the train it spends less time making direction changes and reversing movements. Simple and robust diesel-hydraulic systems mean it can be serviced and maintained by local technicians, cutting down on maintenance costs. The lack of sharp turning and tyre scrubbing also leads to significantly reduced pavement maintenance costs.

Another niche requirement often seen in midsized operations is what Wilson calls ‘pick and run’ container movements. In this case that niche is filled the Combi Xpress Straddle Carrier, or XC.

The XC is based on Combilift’s SC3 Straddle Carrier, which Wilson says has globally become the industry standard, and most popular straddle carrier for operators handling containers away from major ports.

“The SC3 has been in play since 2010, leading the market,” Wilson says. “Building on that, we’ve developed the Combi XC.”

The XC is a high-speed machine, ideal for an operation where containers are required to be carried longer distances, more efficiently. It boasts a high loaded travel speed of 25km/h, and is capable of loading and unloading transports, and stacking containers 2-high.

Wilson says the machine is ideal for long runs. “If you’re doing long runs, maybe taking a container from one end of the terminal to another, this machine is ideal for that. It’s a fast, maneuverable straddle with a high mounted cab for excellent vision – in Australia it’s another unique product offering.” 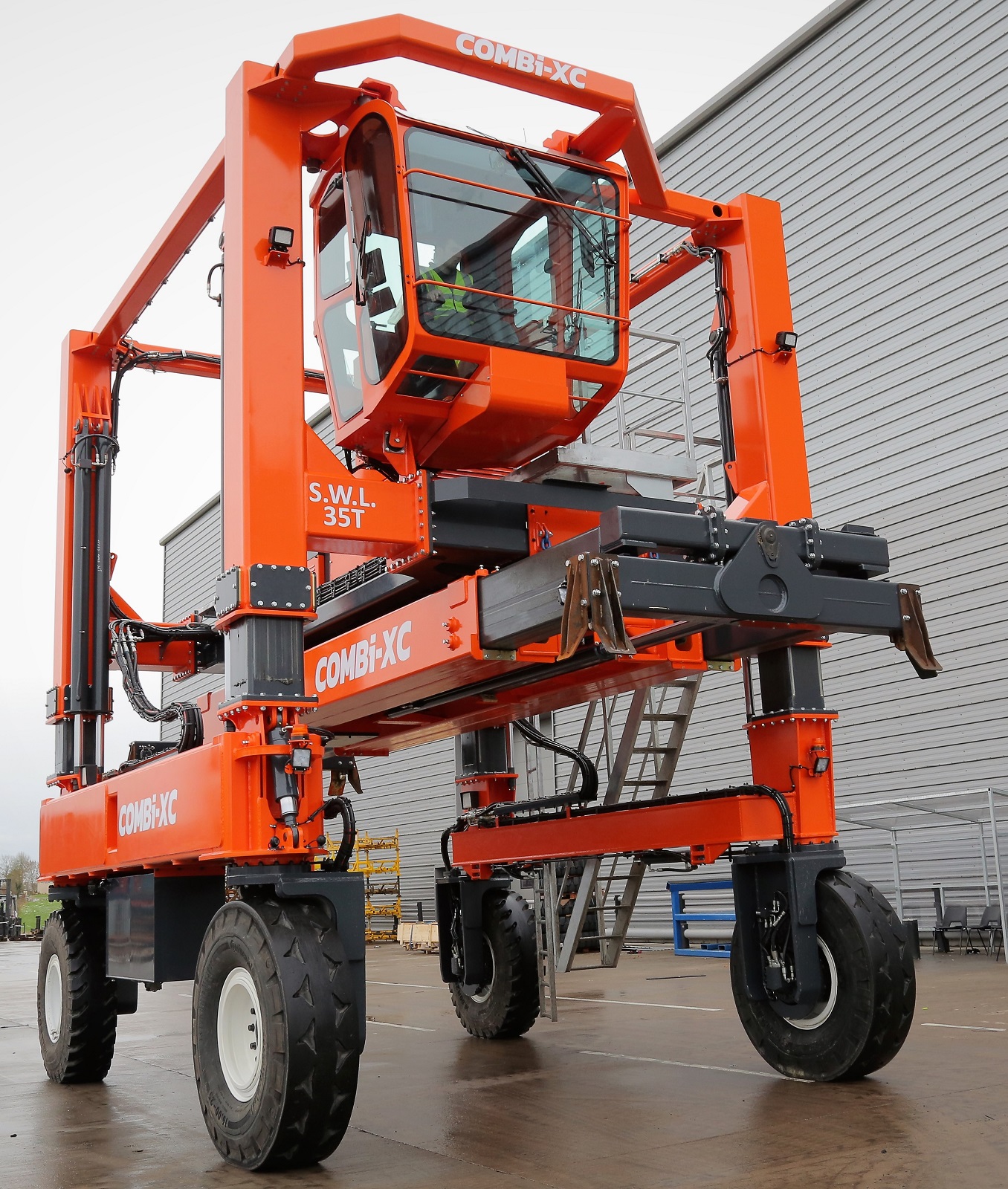 The Combi XC is ideal for long distance ‘pick and run’ operation.

Like in the IMSC’s niche, the XC is offered as an alternative to counterbalanced equipment.

“The XC has a reduced wheel loading, because once again it’s not counterbalanced, and the load is distributed around the machine,” Wilson says. “The machine itself is again lighter, because it doesn’t need a counter weight, making the running cost quite low, especially in a higher speed operation.”

The ramp-friendly Combi XC can operate on compacted stone, bitumen and light concrete. While this makes it ideal for midsized operators, Wilson notes the XC also has its place in larger operations, where portside straddle carriers are commonplace.