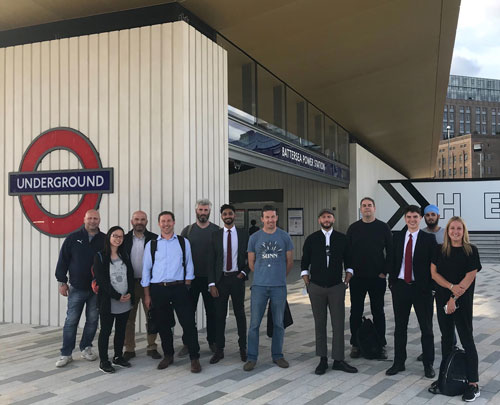 The first new extension to the London Underground (LU) system this century, The Northern Line Extension, serving Battersea Power Station and Nine Elms, has opened on time and without a hitch.

Launched in 2015, the delivery of this significant £1.1 billion project represents a major collaborative effort between TfL and partner contractors, including Thales. The Northern Line Extension adds three kilometres of twin tunnel and two new stations to the Underground’s new total of 272. Trains have been in trial operations with extensive testing throughout the summer, ahead of entering passenger services.

Much of the critical safety work was completed “behind the scenes”, such as the third generation SelTrac Communications Based Train Control system, installed and integrated by Thales while avoiding disruption to services, utilising Christmas closures to test the systems whist the railway was closed to the public.

Thales has a strong track record of working with TfL over many years on the Docklands Light Railway, Northern and Jubilee Lines and more recently on the delivering the Four Lines Modernisation project to upgrade signalling infrastructure on the LU.

Based across the UK, Canada, Italy and Germany, a Thales team of more than 100 individuals have worked on the signalling system extension since 2017. Their work has ranged from designing the signaling system, to installing the trackside equipment and onboard train control systems for all of the 106 Northern Line trains. This culminated in the site testing, commissioning and customer training for the system as a whole.

The signalling system must cope with operations on a particularly complex part of the London Underground network, interfacing with the existing system via the “Kennington Loop”, which requires bi-directional control and train out-stabling.

To ensure a seamless integration, the system’s software was tested in Canada on an operational simulator and extensively in the field, before being uploaded to the extension’s hardware.

Matt Loder, Project Director at Thales in the UK, saiod the company created a digitally twinned, synthetic environment and invited experienced operational customers to get involved in trying out the system, during the software development life-cycle.

Loder was particularly pleased that the system was delivered on time despite a 12-week stand-down when Covid-19 struck. Fortunately, remote working systems were already in place between the UK and Canada, which were adopted for working with London Underground.

Another innovative response to lockdown was the creation of controls to allow electronic sign off for signal design plans, traditionally only done by handwritten signature.