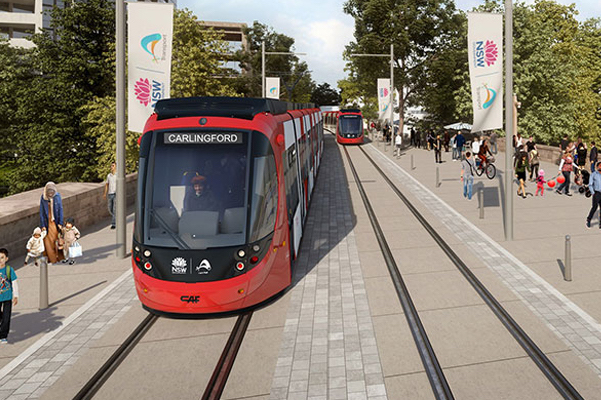 A report, commissioned by the ARA and authored by the RPS Group, has highlighted large social benefits from light rail.

A NEW report released by the Australasian Railway Association (ARA) has confirmed light rail can have “a transformational impact on communities”.

The report has also cautioned against what the ARA says is “gambling with unproven, untested trackless trams technology”.

The report found while the potential for lower implementation costs had increased interest in trackless trams, several overseas examples were being decommissioned due to challenges in delivering reliable services.

Australasian Railway Association chief executive Caroline Wilkie said the report provided a cautionary tale for those considering the use of trackless trams in Australia.

“The international experience has shown that while the technology may offer lower costs in the beginning, problems delivering reliable and comfortable journeys can lead to trackless trams being retired after a relatively short time in operation,” Wilkie said.

The report, commissioned by the ARA and authored by the RPS Group, highlighted the significant social benefits light rail has to offer.

It calls for the assessment of light rail projects to consider their impact on ‘place’ outcomes alongside the traditional transport benefits they deliver.

“Australia and New Zealand are already experiencing a renaissance of light rail as governments recognise the ease of access, connection and sense of community that can be realised from effective transport planning,” Wilkie said.

“Light rail is an invaluable part of the wider transport network and offers real value as part of urban renewal efforts to meet population growth in our cities.

“Light rail should be prioritised in cases where there is potential to transform communities through the introduction of sustainable, long term transport connections.”

The report assessed the circumstances where light rail was most suited to deliver a transport solution when compared to bus, bus replacement technology (BRT) and heavy rail.

It confirmed light rail was well-suited to areas where urban renewal was desired.

The first stage of the Canberra Metro led to house prices rising up to 39 per cent in regions incorporating the light rail corridor from 2014-18, compared with an average of 17 per cent across the ACT.

The benefits of light rail also went beyond land value, with Melbourne’s tram network – operated by Yarra Trams – contributing between $730 to $870 million to the city’s social fabric every year.

The report called for a coordinated approach that included engagement with local government stakeholders when planning light rail projects.

Wilkie said the report’s findings recognised the importance of strong engagement between government and industry to achieve the best outcomes for passengers and the community.

She said communities already planning for greater access to light rail should look forward to wider benefits as projects were delivered.

“New stages for the Canberra and Gold Coast light rail projects and the continued progression of Parramatta Light Rail are crucial to the development of the areas they serve,” Wilkie said.

“It is important these projects are progressed to ensure the benefits already enjoyed by light rail users can be extended even further.”

The report Renaissance of Light Rail is available here.