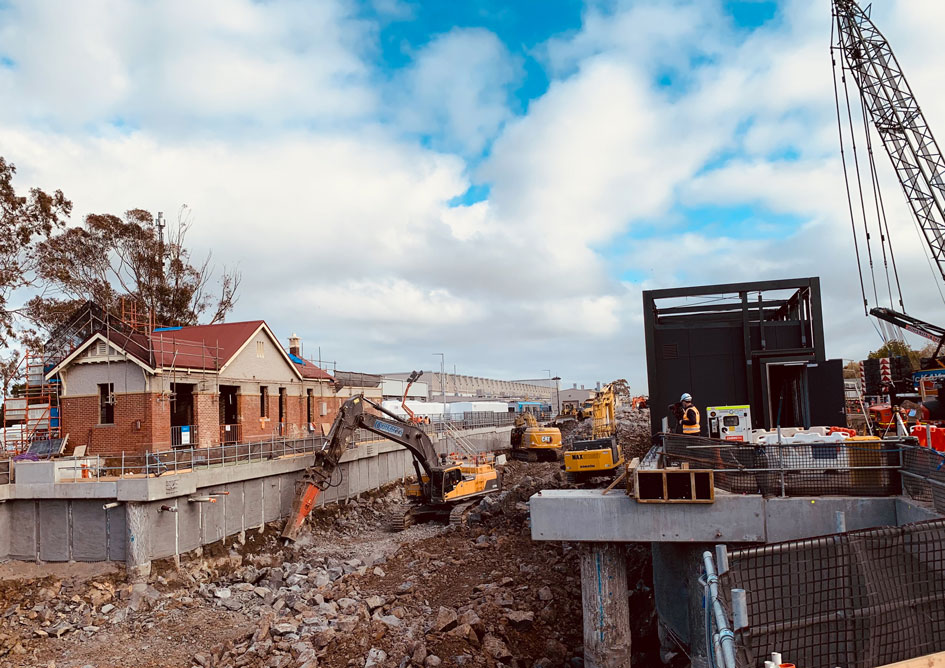 As part of Victoria’s Level Crossing Removal Project, rock breaking machines have made their first appearance at the Ferguson Street level crossing removal site in Williamstown.

While Williamstown’s big dig is already 20 per cent complete, the rock breaking stage marks an important milestone towards removing the dangerous level crossing at the location.

A new 750m rail trench created as part of the project will take the rail line under the road and house lowered platforms for a new North Williamstown Station.

Delivery Manager John Edelsten said large-size excavators up to 85 tonne in size were working to break up a layer of hard basalt rock which lies beneath the surface.

“These excavators are fitted with hydraulic breakers that are like large chisels, breaking away at the rock to allow it to be taken out in manageable sections then taken for recycling,” he said.

With horsepower of up to 363 kilowatts, the rugged machines will work over coming weeks to excavate up to 35,000 tonnes of rock to create a trench up to eight metres deep.

Once finished the machines will be hoisted out with a 350-tonne crawler crane.

The underground basalt rock is part of a 20,000 square metre geological formation which stretches west all the way from Melbourne’s inner suburbs out to Warrnambool and Portland.

“Basalt rock is one of the hardest rocks in the world – some of this rock is harder than steel,” Edeslten said.

“Melbourne itself has the third largest rock plain in the world.”

With excavation expected to generate medium to high noise levels, he thanked nearby residents for their understanding.

Around 150,000 thousand worker hours have now been completed on the project, which reached another key milestone in September with the last of 419 deep supports drilled into the ground where they will support Ferguson Street and the edges of the trench.

Work now continues 24/7 with an extended timeframe on the project, which remains months ahead of its original 2022 schedule.

At this time trains will be running through the new rail trench and picking up passengers from the brand new North Williamstown Station.