Getting the community on board for a major transport project can be hard, but Pacific National found the people and businesses of St Marys to be their staunchest advocates.

As the January day began to heat up, David Trist OAM, stood by an unused rail siding in St Marys and began peeling back the history of what will soon become Pacific National’s new intermodal freight terminal.

“The historical significance of the area goes back to the third governor of Australia, Governor Philip King. He left Australia at the end of his term to go overseas and left his wife and children here. They each received a land grant from the incoming governor and Mrs King got this area and the children the areas around.”

Trist is referring to the semi-urban region that lies between Blacktown and Penrith, in Sydney’s West, which now alters between housing, industrial estates, and grassland.

“The King family ended up with 7-8,000 acres of land and as Mrs King came from a place in Britain called Dunheved, she built a homestead, and that name has gone on and this is the Dunheved Business Park.”

With this layer of substrata uncovered, Trist proceeds to the more recent use of the site, adjacent to the main Western Line out of Sydney.

“In wartime, in 1942-1943, this was taken over by the Commonwealth government and a big munitions factory was built and this rail line was part of the military rail that went out to Ropes Crossing when they had the munitions factory,” recalls Trist, who served in the armed forces during World War Two.

“When WWII concluded in 1945 and the government decided to sell off and within about 15 years there was something like 500 new businesses set up in this area.”

What happens next is of great concern to Trist, a lifelong resident of the area, as well as his fellow Rotary Club members, local business owners, and the wider St Marys community. As the sun begins to beat down on the gravel and dirt of the planned St Marys intermodal facility, Trist describes how the area is at a literal and figurative crossroad.

“The plans for the future are that there’ll be rail links from here to the Nancy Bird Walton airport, road links to the very rapidly growing suburbs in the north west and to south west centres. So, St Marys is the hub of a lot of this rail and road activity.”

As the secretary of the Dunheved Business Park Development Committee, Trist is glad that rather than erasing what is here, Pacific National hope to preserve the history of the site.

“The Dunheved name is going to be continued with this industrial estate and I think Pacific National have already shown that they’re interested in local history.”

OPENING UP A DIALOGUE

According to project director of Pacific National’s proposed freight hub, Leigh Cook, there is a requirement for community engagement in the planning process, and having Trist, as well as half-a-dozen other members of the community at the yet to begin construction site, was a key element of the project from the start.

“There is a requirement for industry to communicate,” said Cook, “We have had a comprehensive strategy to engage with community and to be open and transparent. If people raised a concern or an issue, we would address that in person. We wouldn’t just write to them, we would actually meet them in person, show them the proposal and that’s how we got involved with David.”

Another attendee that January morning was Emmanuel Stratiotis, whose family own the adjacent petrol station.

“I saw the application, I thought the way they designed the routes of the truck movements was a bit of a mistake going in and out of the property,” said Stratiotis. “There’s nothing wrong with the Forrester Road exit and this is what I proposed to them, they should come in from one side and exit from the other.”

With a key concern of the local planning authority being the number of truck movements in the immediate vicinity due to the intermodal terminal, Cook and the project team were open to hearing these kinds of ideas from the community.

“We basically said look it’s our preferred route, it’s actually 290,000 truck kilometres each year less that way and three less intersections so it was a great idea,” said Cook. “We built that into our plan and did some further studies in terms of noise, environmental impact, emissions etcetera and that came back the most positive route.”

While the back and forth of the planning process is to be expected with any major project, having begun with the community in mind from day one has meant Pacific National could work alongside the St Marys community during the planning stage.

“The community has been good,” said Cook. “We did not get one objection from the public and that’s the first time that has happened. We also had stalls at the major shopping centre, we ran advertisements in the local newspaper telling people what we’re doing here, we have a website, a hotline we’d always respond to people and I think that’s what people liked. They’d speak to the project director or the head of corporate communications. We met with all the local politicians from both sides to know what’s going on, it’s been a very positive experience.” 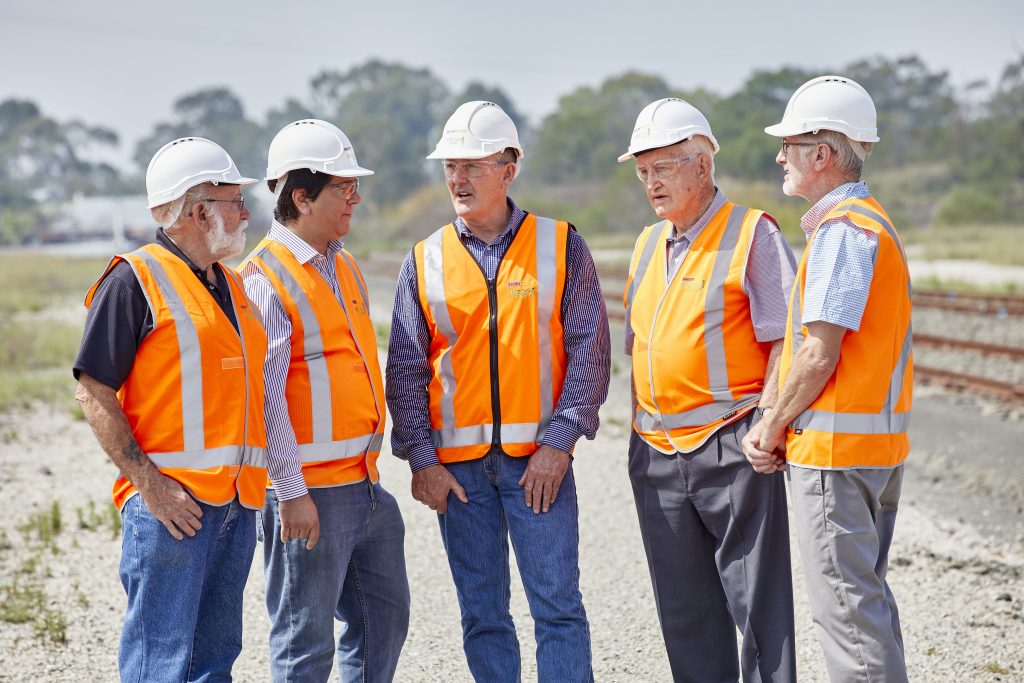 Today, the 10ha site feels poised, awaiting the arrival of earthmoving plant and machinery to begin transforming the site. Cook himself has the bottled-up energy of a front-rower awaiting the call to “engage”.

“We’re ready to start construction as soon as we get the development application approved,” he said.

Pacific National has been in talks with the local and state governments to turn the site into Sydney’s latest intermodal freight hub. Once complete, the site will provide a route for imports to come from Port Botany, 58km away, and then be unloaded of rail shuttles and sent to the ring of distribution centres in St Marys and nearby logistics parks. In the future, the St Marys terminal will be a node in the national network Pacific National is building, particularly with its direct connection to Parkes – located on the Melbourne to Brisbane Inland Rail.

As part of the planning process, Pacific National have studied the site’s impact
on the traffic flows in, and found that the terminal will alleviate pressures on local and regional roads.

“The scientific studies prove beyond reasonable doubt that we’re taking 8.7 million truck kilometres each year off Sydney’s congested motorways,” said Cook. “That has a significant impact on traffic congestion from Port Botany to the Penrith region, let alone the reduction in emissions and carbon footprint.”

In managing the distribution of goods both in St Marys and at Port Botany, Pacific National have a partner in freight and logistics provider ACFS, who are also looking to the wider benefits of such a hub.

“There’s high unemployment out here and ACFS already have 70-75 per cent of their employees living in the region,” said Cook. “They have to travel to Port Botany each day to pick up their truck, drive out – backwards and forwards – and drive home and so for them they’re working where they live which means less commuter traffic”

With other intermodal terminals located in the south-west of Sydney, the businesses that sprang up in St Marys after the Second World War have been waiting for the freight rail connection that was laid down by the wartime munitions factories. Local business owner Tony Jones knows this as well as most.

“This is addressing this lack of freight connections that we’ve suffered for years.”

RAIL THE ROUTE TO REVITALISATION

St Marys is a long way from the glittering harbour of Sydney, and even under the Greater Sydney Commission’s Plan for a metropolis of three cities, St Marys sits in-between the river city of Parramatta and the Parkland city of Penrith. Stratiotis has been seeing how this location affects the vibrancy of St Marys.

“The area is going through a bit of a slump and if you look at the commercial area the shops there are dying a slow death, death by a thousand cuts,” said Stratiotis. He sees the emergence of a new logistics terminal as a way to avoid any further decline.

“These things just have to happen so you can have a bit of a hub and get people working here and spending money.”

To date, Pacific National have shown its commitment to local industry through a commitment to buying local. In addition, apprenticeships and traineeships will be offered as part of the project.

While the St Marys industrial area is home to manufacturers of building products, steel fabricators, and automotive suppliers, its further growth has been hampered by a lack of access to the Sydney freight network.

“We need to have growth in the area, because we need to find some kind of potential and tap into that,” said Stratiotis. “If you don’t utilise this space and get the maximum value or potential use out of it, then you’re not making anything in the area.”

Jones concurred, highlighting that such a service will increasingly be essential for Sydney to become the global hub it is projected to be.

“Importing is going to stimulate the St Marys economy, simply by being a centre of employment and factories like mine over the road will benefit from the increased activity in the area. I think an Industrial estate that doesn’t have that sort of investment is doomed.”

Before even the first sod has been turned, businesses nearby have been expressing interest in accessing a Port Botany shuttle service, and with containers emptied of imports once they reach St Marys, the potential for export is the obvious next step, said Cook.

“Our proposed freight hub will be an import terminal, so all the import shipping containers come from Port Botany to St Marys, and are dispatched as is.”

The spill over effects of such activity are what draws the interest of Stratiotis.

“It helps all our businesses; it helps my business to have traffic coming through with that area, so the more workers and trucks and activity there is, the more it helps every industry that feeds off them, and you’re hoping that would prop up businesses in the area.”

While grand plans abound for the potential of greater Western Sydney, the realities of moving goods throughout an increasingly congested region is keeping those plans on paper.

Without intermodal hubs like St Marys, freight leaving the factories of Western Sydney and coming into the distribution centres has to travel by road.

The folly of that approach is obvious to Stratiotis.

“These tracks that have been here for many years. These weren’t installed yesterday, they’ve been here for 60 years, more, so you’ve got to utilise these things, make them work for you. And if you think trucks are the way of the future, that’s wrong.”

As Sydney and Australia grapples with how to move increasingly large volumes of freight, perhaps listening to what those who are at the choke points are saying could provide an outlet.

Stratiotis certainly has an opinion.

“It’s something that should have been done years ago.”