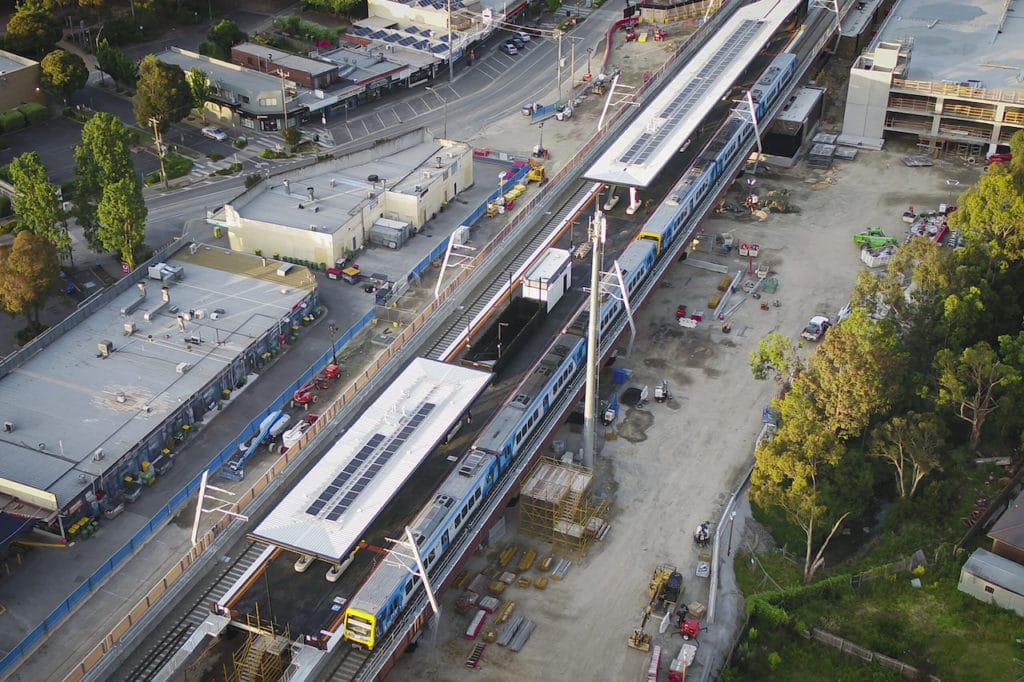 An aerial view of the new Mooroolbark station.

Melbourne’s outer-east has celebrated the removal of two dangerous and congested level crossings – and the opening of two brand new stations in their place – bringing the state to the brink of 50 level crossing removals.

The Manchester Road, Mooroolbark and Maroondah Highway, Lilydale level crossings have been consigned to history, with traffic now flowing freely beneath two rail bridges on the Lilydale line.

They are the 48th and 49th level crossings to be removed in Melbourne since the program started.

More than 53,000 vehicles used the two level crossings every day, while boom gates were down for up to a quarter of the morning peak, disrupting traffic and creating congestion.

Meanwhile, the two new stations have taken pride of place on eastern Melbourne’s skyline, with train services resuming and commuters getting their first look at the state-of-the-art facilities.

During a two-month construction blitz, crews have installed station platforms with canopies covering 70 per cent of their surface area, new station entrances, stairwells and lifts, ensuring locals have access to up-to-date, modern facilities during their commute.

The stations have been designed in close consultation with the communities that use them to ensure they provide what locals need, and maintain links to the heritage of Mooroolbark and Lilydale.

This includes features such as Coldstream stone cladding, a commemorative artwork at Mooroolbark and bluestone paving inside the station concourses.

Landscape works will begin, including the revitalisation of new community spaces and planting more than 60,000 trees, shrubs and grasses.

It will have a direct connection to the Mooroolbark station, CCTV and improved lighting when it is completed.

Once completed in 2025, there will be no level crossings on the Lilydale line, paving the way for more services more often, and less congestion and safer commutes for drivers.