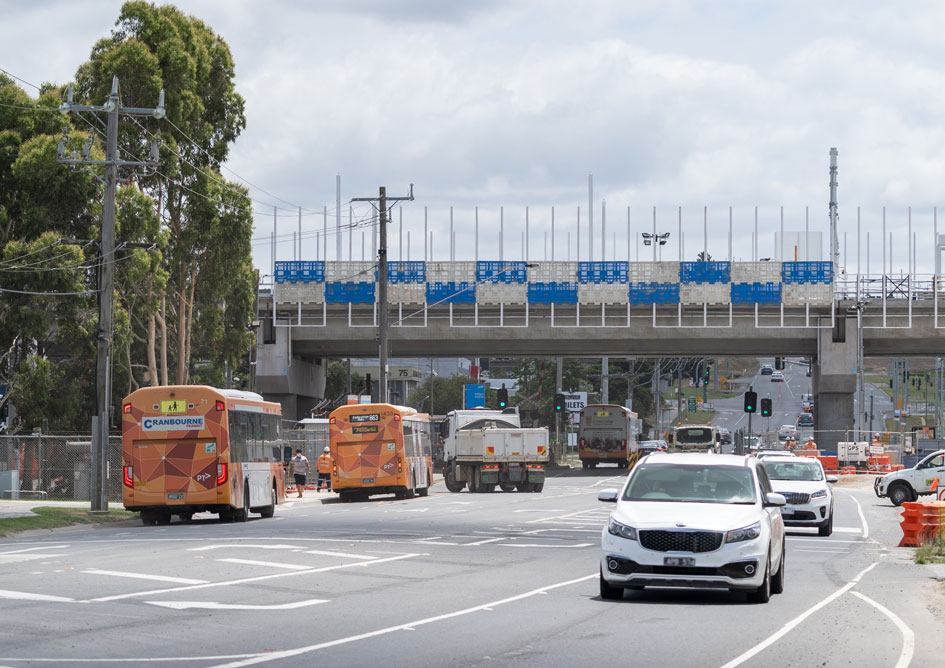 Crews are gearing up for the final push to remove the dangerous and congested Hallam Road level crossing in Melbourne and build a new Hallam Station, with passengers and road users asked to plan ahead over the coming weeks as the project reaches the finish line.

The level crossing will be gone for good in April this year, improving safety for drivers on Hallam Road, which was the site of 14 near misses in the past 10 years – 11 involving pedestrians and three involving vehicles.

A new elevated rail bridge at the site will boost safety and ease congestion for the 20,000 vehicles that use Hallam Road every day.

Crews have been working around the clock to put the finishing touches on the new station, which has been built with two entrances to service more than 2000 commuters every day in Melbourne’s booming south-east.

The station includes a new forecourt on the west side of Hallam Road, more bike storage and improved parking and safer pedestrian and cycling links through the precinct.

Since work started more than 4000 cubic metres of concrete has been used to build the impressive 394.5 metre rail bridge and 162 metre station platforms.

The Victorian Government has invested $15 billion in removing every level crossing on the Pakenham Line, paving the way for more services, more often, when the Metro Tunnel opens, and high-capacity trains are rolled out by 2025.

In total, 85 level crossings will be removed by 2025 – with 56 already gone for good – improving safety and reducing congestion in Melbourne’s suburbs.

To allow crews to safely finish this project there will be rail and road disruptions throughout autumn. These disruptions have been carefully coordinated to reduce disruption wherever possible.

Hallam Road will be closed at the level crossing from Wednesday, 9 March to Saturday, 2 April. Bus stops will be moved during this time to allow crews to remove the existing rail line and reconstruct the road.

Access to adjacent businesses and residences will still be maintained and detour routes via Pound Road and Princes Highway will be in place, and road users are asked to allow extra time and plan ahead.

Buses will replace trains between Dandenong and Pakenham stations from 9pm, Wednesday, 9 March to last service Monday, 21 March and trains will use the new elevated rail bridge from Tuesday, 22 March.

The existing Hallam Station will be closed from 9pm Wednesday, 9 March, with the new station opening to passengers in May.

During this time, trains will run express through Hallam Station, with shuttle buses taking passengers between Dandenong, Hallam and Narre Warren stations to connect passengers with train services.

Bridging the gap at Hallam