Utilising its extensive in-house expertise, Manco Rail was able to provide a unique solution to a challenging project.

Meeting the challenge of increasing rail services in cities where space is at a premium has led to more projects extending the capabilities of what is possible in major rail construction projects.

In Sydney, this has led to projects going underground, with the massive Sydney Metro project, Australia’s largest public transport infrastructure project, being built largely below the city.

According to Bryan Black, managing director of Manco Rail, this presents an opportunity for businesses such as his.

“With the degree of rail infrastructure projects occurring throughout the Southern Hemisphere, there is a real opportunity for rail equipment engineering companies to make a considerable investment in both time and capital with innovative, efficiency enhancing plant, that enables contractors to improve productivity and performance by changing from traditional rail construction methodologies.”

While construction-related headlines have been dominated by the movements of the five tunnel boring machines above and below Sydney harbour, constructing a metro line largely underground has required suppliers and subcontractors to transform the delivery of systems to the project.

For Manco Rail, a project such as this fits into the company’s DNA as an OEM with the ability to innovate. Based in New Zealand, the company has been providing custom-built plant and equipment for over 40 years.

In the case of Sydney Metro City and Southwest, it was these qualities that led the line-wide contractor, Systems Connect to select Manco. A joint venture between CPB Contractors and UGL, Systems Connect will deliver the laying of track, power, communications, and signalling equipment to the project between Chatswood and Bankstown. The project involves delivering rail and track on twin 15.5km tunnels between Chatswood, under Sydney Harbour, below the Sydney CBD, and on to Sydenham. It is here that Manco’s equipment comes into its own.

“Over the years, our equipment has ended up operating in rail tunnels by the very nature that most tunnels interface with a tunnel network of some sorts, whether it be due to terrain or underground stations to accommodate CBD or high density areas,” said Black.

Compounding the standard complexities of installing new track, the project is constrained by having only three major access points for equipment and materials along 31km of tunnels. In addition, gradients in the tunnels are steep, at 4.5 per cent, said Paul Ryan, senior project manager at Systems Connect.

“Construction within this tunnel environment is inherently complex. Access is limited, spaces are confined and grades are steeper. We worked with Manco Rail to custom design equipment that overcomes these challenges,” he said.

The particular equipment that Manco has provided for the Sydney Metro CBD and South West project are rail transfer equipment and sleeper-laying trailers.

Developed over 14 months, the custom- designed equipment lays the rail, spreads it out, places the sleepers, and then pulls the rail back over the top. The process of developing this one-of-a-kind equipment took a blank slate approach, said Black.

“The design and interface of each plant item has involved hundreds and hundreds of design hours. Utilising a highly competent team of young mechanical engineers tasked with starting with a ‘clean piece of paper, and fresh ideas’, brain storming meetings were held on a regular basis, where even the most radical concepts where discussed,” said Black.

“Ultimately, rational thinking prevailed, which – however – incorporated some of the vast array of available technologies, in electronics, motive power, hydraulics, fabrication materials and ergonomics.”

The entire process is radio remote controlled, crucially limiting the number of people in high-risk areas.

Afterwards, the Manco track-laying equipment will return, including wheel excavators, trailers, and tugs, to assist with concreting activities, and electrical and mechanical installations. 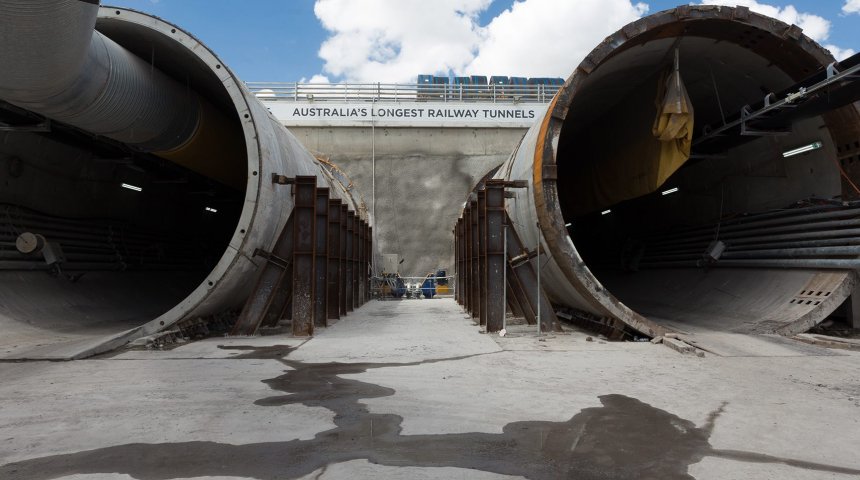 The confined nature of the working environment demands a sequential process, and Manco’s familiarity with working in railway tunnels led to the company being selected by Systems Connect for the complex project. Past work not only in Australia, but New Zealand, Hong Kong, Thailand, and Malaysia, enabled Manco to be selected as the subcontractor.

What was key in the relationship between Manco and Systems Connect was the New Zealand company’s ability to modify and custom design equipment for the particular project. The team collaborated to automate processes wherever possible and combine innovation with safety.

Manco’s extensive experience in rail construction was also important as Systems Connect required rail network certification. A higher level of testing and compliance requirements were applied to the project, particularly due to the steel gradients in the tunnels. Manco’s previously experience in rail certification across Australia, as well as their ability to supply fully certified equipment prior to construction, led to the company being selected by Systems Connect. Manco’s knowledge of the rail sector enabled this requirement to be met.

“All equipment manufactured is designed around specific and well known standards. Some standards are unique to rail and some to elevating personnel, suspended loads, and general operational safety,” said Black.

“Manco Rail has dedicated compliance officers that are specialists in their particular fields, be it, engineering quality, through to safety and the working environment approved emissions.”

A combination of innovation, safety, and proven capacity has seen Manco rail deliver on this major infrastructure project.