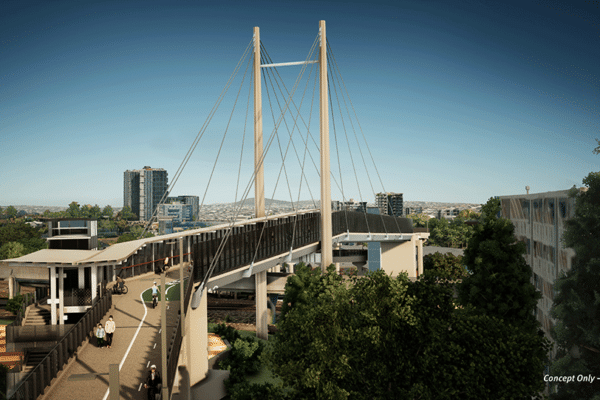 Designs have been released for a new pedestrian and cycle bridge that will connect a new Cross River Rail underground station with existing transport infrastructure, at the heart of Brisbane’s Boggo Road health, science and education precinct.

The 480-metre-long bridge crossing freight and passenger rail lines will link the new Boggo Road and existing Park Road rail and Boggo Road bus stations west of the tracks, with the Princess Alexandra Hospital and the PAH South East Busway platforms to the east.

The bridge will provide faster and more convenient walking and cycling connections, easier access to the local cycle network and improved connectivity to public transport services.

It will be a game-changer for the local community as well as those who work, who study or who are treated at the many world-class facilities now located at Boggo Road.

The new bridge, which included lifts on both sides, dedicated cycle and pedestrian paths, seating, shade and rest stops, will be accessibility compliant and is designed to meet safety requirements to pass over the rail corridor.

A name for the new bridge has not yet been selected and there will be an opportunity for the public to contribute ideas.

For example, it could be named after somebody local, who has a track record of service and creating community connections, even someone linked to health, science and education, or take a name that honours local First Nations culture.

The bridge and the new underground station it connects to will see Boggo Road become South East Queensland’s second busiest transport interchange, with over 22,000 commuters using the new station each weekday by 2036.

Construction is due to commence from March and is expected to be completed in late 2023.