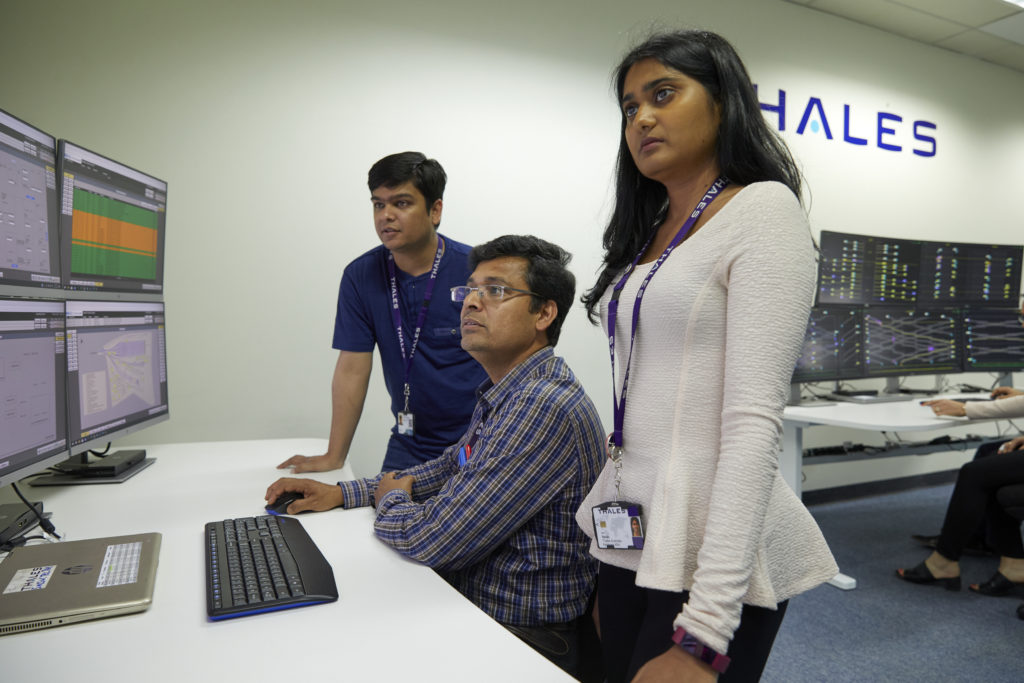 To meet the demand for safer, more efficient and increasingly sustainable mobility, railways are taking the next step forward towards autonomy. Thales is showing the way.

The system used a new type of signalling technology, now known as SelTrac, developed and maintained by Thales. This Automatic Train Operation (ATO) technology meant that the main driving functions were carried out by computer software. At Grade of Automation level 4 (GoA4), the driverless system ensured on time running and high reliability.

More than thirty years later, this ground-breaking technology has provided the basis for a host of other improvements. With the benefit of modern sensors, the technology first deployed in Vancouver is now moving from automatic to autonomous train operation.

Today, trains equipped with advanced technology use artificial intelligence to respond to changes in the environment. Sensors and software enable the system to determine its exact position, review its speed, detect obstacles, monitor its operational condition and surrounding environment, along with other functions where necessary.

As Elias Barakat, Thales’ general manager, ground transportation systems explains, in getting trains to take the right decisions at the right time, a step-by-step journey towards autonomy can immediately realise benefits.

“The beauty is that real autonomous capabilities can be built up incrementally starting from today. Functions range from train positioning all the way up to full autonomous operation,” Barakat said.

“The benefits are huge. They include reduced operating costs, extra train paths, improved reliability, less trackside equipment and lower energy consumption. The revolution is closer than you think. The first autonomous trains should be in scheduled service just a few years from now.”

What made early implementation possible in Vancouver was that the Expo Line was a standalone system. But with the adoption of next-generation signalling systems on main-lines, ATO soon can be rolled out on more complex rail networks.

“But the advent of ETCS (the European Train Control System) means that it is now possible to provide ATO as an overlay, with energy savings of 10-20 per cent. And looking further ahead, the combination of ATO and autonomous operation could yield power savings of up to 30 per cent,” said Glenn Maker, Thales sales director, ground transportation systems.

The building blocks of autonomy

Currently, railways around the globe are at a turning point. As the world continues to urbanise and pressure mounts to decarbonise the transport sector, rail has a greater role than ever to play in meeting the need for efficient, safer, and sustainable mobility.

At the same time, much of the industry relies upon systems that are decades old and are reaching the limit of their capacity. This is significantly the case in the field of signalling, where infrastructure managers are seeking to access more train paths to make the most of existing infrastructure. The current technology of fixed block signalling limits this aim by imposing a finite constraint on possible train traffic.

Newer moving block systems are now starting to be deployed to overcome this obstacle, however that is easier said than done.

“The ideal solution would be to deploy ETCS Level 3 signalling. This provides more capacity because it is based on the principle of moving block. Headways are reduced, so trains can be run closer together,” said Maker.

“But implementing pure ETCS Level 3 presents big practical problems – not least the challenge of proving the integrity of trains at any given time. This is straightforward with modern passenger trains, but proving that a freight train has not become divided is much more difficult.”

Thales, as a leader in the signalling field, has developed a hybrid ETCS Level 3 that provides a solution on mixed-traffic lines.

On urban, metro networks, the foundation of autonomy is the latest version of the SelTrac system first deployed to Vancouver. SelTrac G8 is designed to be easily upgraded as the pace of technological development only accelerates.

“Thanks to our new platform and new architecture, customers who deploy SelTrac G8 can benefit from lifelong innovation insertion, for example, just by upgrading the software. Customers with previous versions of SelTrac can also benefit because the G8 platform can be provided as an upgrade to existing SelTrac systems,” said Nuno Guerra, Thales business development manager, ground transportation.

One critical area where continuous updates are essential is in cyber security. While digitalisation promises many benefits, the convergence of IT and OT in automatic and autonomous systems present a cyber security hazard, one that can be overcome through vigilant updates.

While on a personal PC this is not an obstacle, updating rail software systems in the past has required breaks in operational continuity, making operators reluctant to update. SelTrac G8 overcomes this issue and provides a platform for further autonomy.

“Our SelTrac G8 platform is autonomy ready. In fact, one of the autonomous capabilities we are developing is designed to make both greenfield and brownfield CBTC deployments faster and easier than ever, with rapid train conversion and minimal trackside equipment,” Guerra said.

While these systems are largely invisible to the passenger, the shift from automatic to autonomous will also deliver a new passenger experience.

Increasingly passengers and operators are seeking a more cohesive experience, with information, security, and connectivity high priorities. These services can be delivered in an individualised or personalised manner through Thales’s next generation technology.

“Our integrated onboard solution is designed to meet the demand for passenger information, passenger security, connectivity and entertainment on trains. It also supports new capabilities – including onboard video analytics. This uses artificial intelligence and computer vision algorithms to ‘see’ what’s happening on trains as they move around the network. Video analytics provides the foundation for new functions including passenger density measurements and violent event detection, as well as detecting remaining passengers and luggage,” said Guerra.

Coming in a unique, single-box configuration, the onboard solution is easy to install and accommodates any application on any rollingstock.

To deliver the birth of autonomous trains, not only has technology come a long way since 1985, but the ways of working as well. For Thales, one way that this has occurred is in the use of simulation models such as digital twins to test a technology’s effectiveness during the design phase.

“What makes digital twins so valuable is that they not only help you to understand what’s happening in the real world, but also to carry out experiments and explore ‘what if’ scenarios. At Thales, our R&D teams are using digital twin technology to fine-tune the next generation of transport solutions,” said Barakat.

For operators adopting this technology, ways of working may have been significantly disrupted during the COVID-19 pandemic, however this is perhaps only an acceleration of a trend towards the decentralisation permitted by digital platforms. Enabling that trend to continue, albeit with proper security in place, Thales has developed a remote working solution over an encrypted network with secure two-factor authentication.

“Freedom to work anywhere contributes to resilience – and thanks to remote working, many organisations have remained profitable throughout the pandemic. But on railways, teleworking must be carefully managed to ensure that critical functions are not compromised,” said Barakat.

“Staff can work anywhere – on the platform, on the move and even from home.”

With all this combined, just as Thales delivered the innovation responsible for the first automatic metro line in the 1980s, it is continuing to push forward today.

“At Thales, innovation is part of our DNA. Open innovation, co-innovation with customers and collaboration with startups are the cornerstones of our strategy. This demands a combination of agility, the resources of a large company and the collaborative intelligence of top researchers,” said Barakat. “We offer all of this.”