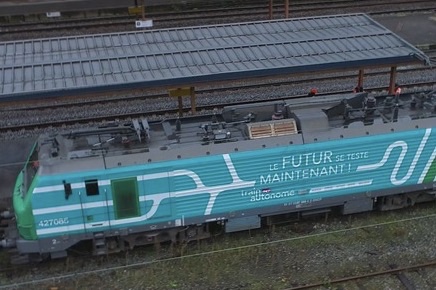 A locomotive has completed a trial of semi-autonomous operation under real operating conditions in France.

Travelling between Longwy and Longuyon on the national rail network in eastern France, the Prime BB27000 locomotive operated with fully automated acceleration and braking.

The trial was conducted on a section of track equipped with European signalling system ERTMS, and while under the supervision of a driver, demonstrated the possibility of autonomous operation on mainline networks.

The trial, conducted on October 29, 2020, was guided by a consortium including Alstom, Altran, Apsys, Hitachi Rail, Railenium, and SNCF.

Over a hundred people from the companies completed work including designing computer systems, cabling, and software programming to enable the trial to meet its schedule and ambition.

“The research and tests conducted with our partners over these two years have allowed us to make rapid progress towards the autonomous train, and we are overcoming the technical obstacles one by one. Our work is aimed at making the rail mode more competitive and will contribute to developing a more environmentally-friendly mode of transport.”

Alstom is leading the technical aspects of the project, and Jean-Baptiste Eyméoud, president of Alstom France, said the company was proud to be able to contribute.

“This project is a major opportunity for Alstom to promote its skills and innovations in the field of rail automations and autonomous transport, thereby developing its leadership in new forms of autonomous and digital mobility.”

By the end of 2021, the consortium will run a train with the same level of autonomy on a line with lateral signalling, without modifications to infrastructure.

Simultaneously, work is progressing on full automation, including functions such as obstacle detection or environment monitoring

By 2023 the consortium plans to run a prototype in complete autonomy.

Trials of autonomous train operation on regional lines are also underway in Germany.