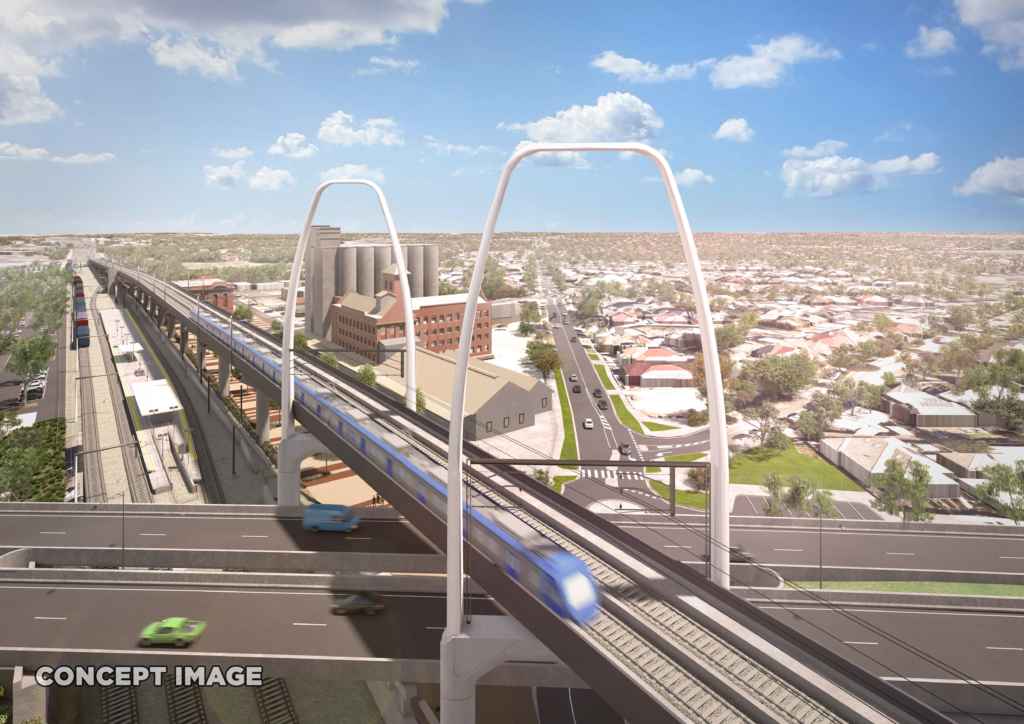 Ministers from both Victoria and the Commonwealth have come together to talk up the benefits of a rail link to Melbourne Airport.

VICTORIANS have received a glimpse of how Melbourne Airport Rail could look at key locations along its route, including the soon-to-be second highest bridge in Melbourne, as the Australian and Victorian governments proceed with delivering the long awaited airport rail line.

Both governments have committed up to $5 billion each for the construction of the project.

Minister Fletcher said tourists visiting the state would be able to get from the airport to regional Victoria in a hassle-free way.

“We know how long people have been waiting to see Melbourne Airport Rail become a reality, and these concept designs show just how much progress is happening on this transformational project,” Fletcher said.

“The Morrison Government is pleased to announce that this major investment is expected to deliver approximately 8,000 construction jobs, and give Melbourne and greater Victoria a state-of-the-art airport connection.”

The new bridge is to be 550 metres long, 50 metres high and built alongside the existing heritage-listed rail bridge over the Maribyrnong River.

Sunshine and the Albion Junction, airport trains are to gradually rise to travel on new elevated twin tracks across a distance of less than two kilometres, before descending and continuing at ground level alongside the existing freight line through Sunshine and Airport West towards the airport.

“Works from Sunshine to Albion will form an important part of Melbourne Airport Rail, with Sunshine becoming a key station for airport services and other regional and metro lines,” she said.

“These improvements will make travelling through Sunshine easier, as the number of trains and passengers increases following the completion of projects such as the new Metro Tunnel, Sunbury Line Upgrade and Melbourne Airport Rail.”

Reference design along the alignment is underway in consultation with key stakeholders including councils, communities, government agencies, Heritage Victoria and contractors.

Construction on the project is set to start next year subject to all relevant approvals, with early works such as relocating utilities.

A recent round of online community engagement again highlighted the significant community interest in getting on with Melbourne Airport Rail and the benefits it will provide for the people of metropolitan and regional Victoria. More than 1,800 people logged into a virtual engagement room, more than 1,000 surveys were completed, and more than 200 comments submitted.

Key themes from feedback included a desire to minimise disruptions on already-busy local roads during construction; protect local heritage and the environment; and improve local areas with more community spaces.

This valuable local feedback will help to shape the project and there will be more opportunities for people to have their say as planning progresses.

Melbourne Airport Rail has a target opening date of 2029, subject to relevant Australian and Victorian Government planning, environmental and other government approvals.

Victoria’s Big Build is continuing to transform road and rail Melbourne’s west, with construction progressing on the West Gate Tunnel and Sunbury Line Upgrade, planning continuing for staged rail investments as part of the Western Rail Plan and 13 level crossings either already gone or targeted for removal.