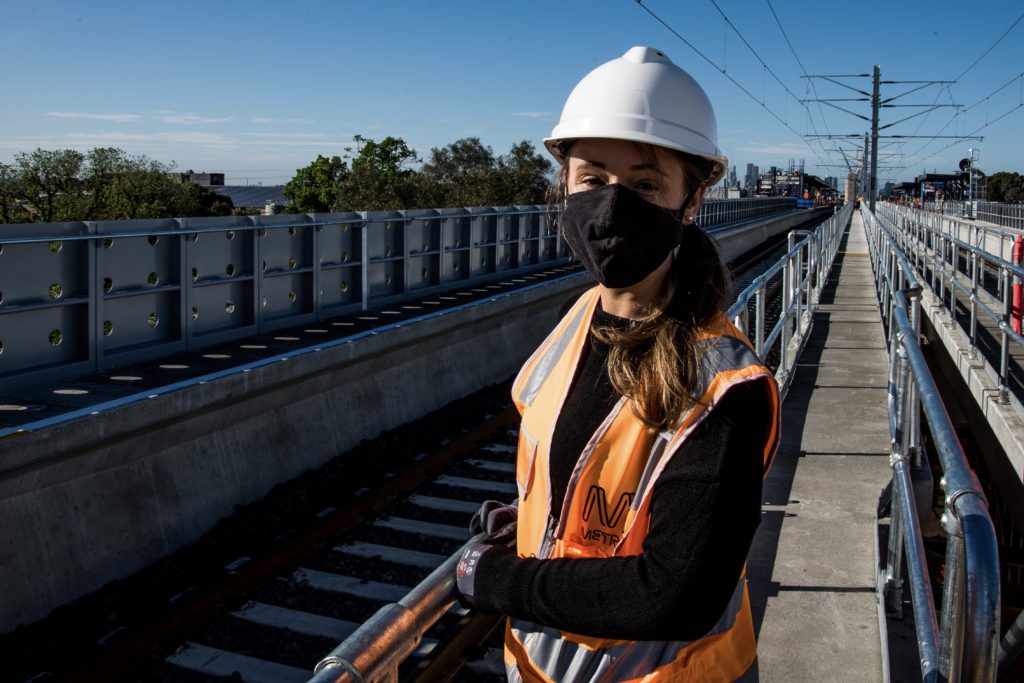 Over the course of her career, Amy Lezala has brought a systems approach to rail engineering, one that will be useful as rail confronts its sustainable future.

A rail career was not Amy Lezala’s first choice when finishing her engineering degree. The current engineering manager for the level crossing review group at Metro Trains Melbourne had grown up in a rail family in the UK but wanted to do something different.

“I’ve learnt over the years that every time I try and do something different it always pushes me down to a particular path.”

Graduating from the University of Birmingham with a Bachelor of Engineering with honours, Lezala had applied for graduate schemes in the aviation and defence industries in the UK. With Birmingham University having strong ties to the aviation and automotive sector, rail was not on Lezala’s radar. However, after searching for other graduate programs, Lezala applied for Bombardier’s graduate program in the UK and was accepted, and since then she hasn’t looked back.

“I said, ‘I’ll do the graduate scheme for a couple of years and then I’ll see what’s after that’ now it’s been 13 years. Once you’re in the rail industry you get hooked and enjoy it,” Lezala told Rail Express.

Reflecting on the decisions she made at the early stages of her career now, Lezala highlights that rail is competing with other industries for young graduates and, if it hopes to encourage them to follow in her footsteps, it needs to be visible.

With the UK deciding that rail would be a key industry for the country’s manufacturing economy, her alma mater Birmingham University is now established as a rail education hub, leading research and teaching for the next generation of rail engineers.

For Lezala, her basis in engineering was supplemented by the on the job training she received as part of Bombardier’s graduate program, which formed the foundations for her career.

“I spent a lot of time underneath the trains and in the trains with the staff who were performing the maintenance, travelling up and down the network with vehicles in service.”

After beginning as a maintenance graduate, Lezala then moved into the design and materials team, with the first train that Lezala was a part of the design process from start to finish going into service was the Stansted Express. During her time designing rollingstock, Lezala was supported by Bombardier to complete a masters in fire safety engineering. With these skills Lezala contributed to projects around Europe, before getting a call from Bombardier’s team in Australia.

“We got a call from our colleagues saying, ‘We need some help because we’ve got some fire requirements on this new project and we’re not sure how to approach them, what the strategy is, and how to manage them.’ I was coaching the Australia team from the UK and then eventually they said would you like to move to Australia and be our Fire Safety Engineer within our Reliability, Availability, Maintainability and Safety (RAMS) team?” Lezala took up the offer and moved to Brisbane to work with Bombardier’s Australian design team, ending up working on the QNGR program. While fire safety had sat within the materials field in the UK, in Australia, fire safety was part of the RAMS area, which made for a systematic approach to design. As the QNGR project was procured through a public-private partnership (PPP), reliability and performance became inextricably linked to the success of the project, further cementing a whole of system lifecycle approach.

For Lezala this was a significant shift and spoke to the broader need to incorporate sustainability at all points in a project’s lifecycle. Today, after a brief stint with SNC Lavalin, Lezala is now applying these insights to the assurance of infrastructure with Metro Trains Melbourne.

ENGINEERING FOR WHOLE OF SERVICE

“There’s been a common theme all the way through my career which has been the focus on the lifecycle of the whole asset,” said Lezala.

While this theme had initially emerged in Lezala’s experience maintaining and designing rollingstock, the focus is much the same today, albeit on fixed assets.

“Exactly the same conversations I was having 11 years ago when building a train I’m having now on removing a level crossing. It all comes down to what is the scope, what are the requirements, what can be delivered and how do we safely manage the gap,” she said.

While PPPs like the QNGR project have certainly come into vogue in the delivery of major pieces of rail infrastructure and have an impact on a project’s lifecycle goals, Lezala also sees a cultural shift in the focus on sustainability, akin to the changes in perceptions around the importance of safety decades ago.

“Thirty to forty years ago, safety management was a nice to have and it was only once the standards, requirements, and policies started to be put in place that people were forced to do it. Now it’s no longer an elective it’s a given, and people want to behave safely. Currently, sustainability is on that same pathway – it’s an elective, a nice to have, but we don’t have enough policy and we don’t have enough standards or requirements that drive sustainable behaviour.”

Bodies such as the Infrastructure Sustainability Council of Australia (ISCA) are setting standards for the sustainability of rail projects, including fixed infrastructure and rollingstock, however Lezala notes that these goals have to be mandated in contracts as well.

“We are living in a commercial world and the content of a contract is a key driver for behaviour. The delivery body will do what is set out in the contract, otherwise they are not doing their job. If a contract is written without consideration for the life of the asset, you may not get an outcome that is best for the network, the end users or the client”

Recognising these dynamics earlier on can lead to outcomes that are more cognisant of the whole asset lifecycle.

“Everyone has a role to play at each stage of a project. In my current role, I work with my team to provide assurance on behalf of MTM that the projects are meeting the technical requirements set out in the contract. When I was a member of a design team I was thinking very much about how it’s built in line with the contract and what the client is specifically asking for, whereas when working on a bid I was asking what are we committing to and should we be asking to put more sustainable targets and behaviour that is commensurate with a good network outcome.”

Beyond the contract negotiations, Lezala also sees a role for innovation in enabling rail to become more sustainable. However, this has to be balanced with the requirement that new products or components meet safety standards.

“Since the days where I was a materials engineer I have had suppliers come up to me and say ‘I’ve got this great new product you guys should definitely get on board with this.’ But it’s not an approved product, we have a type approval program where we have products that are rigorously tested for use on the network, bearing in mind that the products might be out there for 50-60 years. If there is a product that needs to be tested for that amount of service, how do you do that when it’s new to the market and never been used before? We need to get better as an industry with getting these products safely onto our networks.”

It is these questions and others that Lezala continues to ask of the rail industry as the recognised sustainability of rail can put the industry on the map for the generation of engineers who will follow in Lezala’s footsteps.

“You don’t need to go and work on an eco- project to have an impact on sustainability, you can actually just work in rail and you’ll be doing a huge amount for our sustainable future. If we as an industry advertise this then we can attract a lot more people to rail, which will help with our skills gap, and it’ll also help with this post COVID-19 recovery by highlighting the importance of rail for sustainable communities.