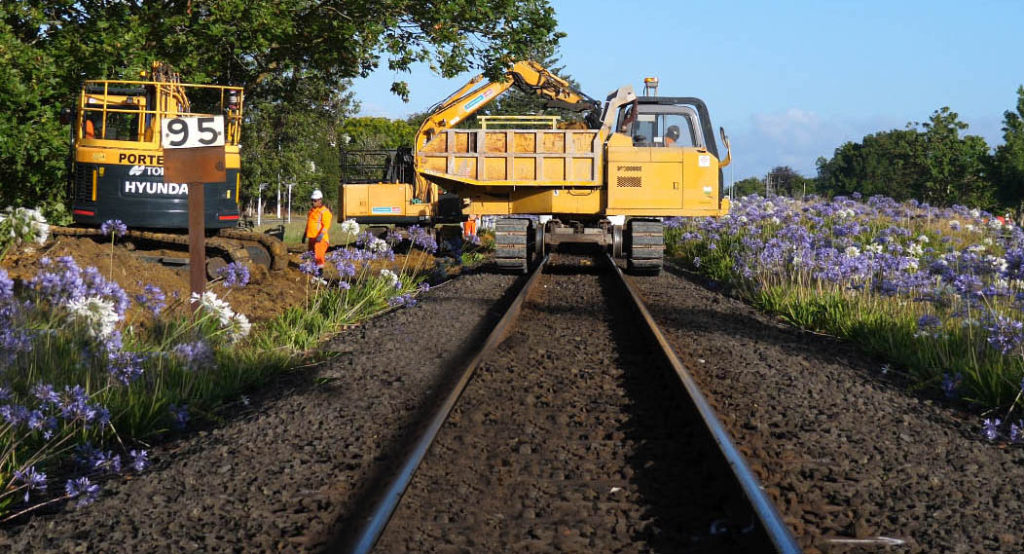 Specialist machines that can operate on rail tracks and the ground will do much of the work.

KiwiRail and Auckland Transport (AT) are suspending the diesel passenger train service that connects Papakura and Pukekohe from September 2022 until the second half of 2024, to allow for the work needed to extend the electric train service to Pukekohe.

The announcement comes as work picks up to ready Auckland’s rail network for the opening of the City Rail Link (CRL) in late 2024. The service will be replaced with buses and then restart with the electric trains that are currently used on the remainder of Auckland’s metro network.

KiwiRail’s Chief Operating Officer, Todd Moyle, says Aucklanders are now seeing a major step change in the amount work being done to improve the city’s rail network over the next three years.

“The City Rail Link is going to be a game-changer for Auckland, allowing more frequent and more convenient commuter services to get people around the city. But to get to that point there is a vast amount to be done over the next few years,” he said.

“We are working closely with Auckland Transport to develop a multi-year work schedule across the network that will give the best outcome for rail users and allows us to get the work done safely and to schedule. It will create some disruption for commuters and neighbours, but we will make sure Aucklanders are informed about what will be happening and when.

“This includes the significant work that needs to be carried out on the 19km section of line between Papakura and Pukekohe until 2025. This includes installing the electrification masts and wires, modernising the existing track infrastructure ready for CRL operations, redeveloping Pukekohe station and building new stations at Drury and Paerata.

“Most of this work will require at least one track, and often two, to be closed at multiple locations along the route. Without suspending the commuter service, we would not be able to get the work done safely on schedule for the opening of the CRL.”

To enable the works to be delivered safely and on schedule, AT has agreed to replace the ageing Papakura-Pukekohe diesel shuttle service train with buses from September 2022, until electric units can run on that stretch of track.

“The alternative would see rail passengers travelling between Papakura and Pukekohe facing many years of disrupted journeys and a delayed completion date,” he said.

“The electrification between Papakura and Pukekohe is expected to be completed by the second half of 2024, and in early 2025 new stations at Drury Central and Paerata should be open to the public. The new stations will provide convenient access for locals and commuters in the south will no longer need to change trains at Papakura.”

The trains known as Diesel Multiple Units (DMUs) are nearing 40 years of age and played an integral role in revitalising Auckland’s rail commute network in the 1990s and early 2000s.

More information regarding the final day of service for the Pukekohe Connection and replacement bus services will be provided to commuters in early 2022.