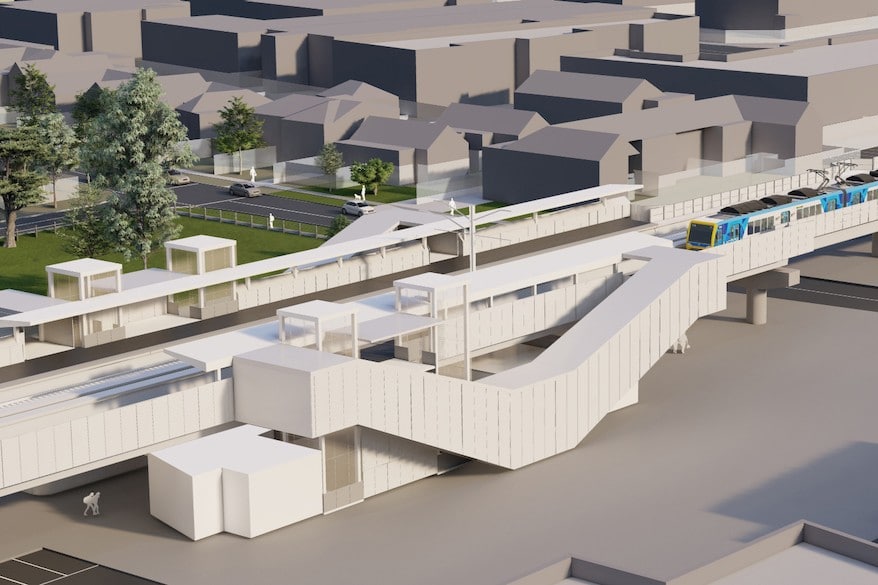 An artist's impression of the elevated rail bridge and new Narre Warren Station.

The Victorian Government has revealed the early concept designs for the new Narre Warren Station and the elevated rail bridge in Melbourne’s east, which will remove the level crossing at Webb Street and see the precinct transformed.

Removing the level crossing will relieve congestion on Webb Street and allow more trains to run on the Pakenham line, more often.

Around 13,200 vehicles use the level crossing each day, with the boom gates down for up to 40 minutes of the morning peak when up to 25 trains pass through.

Since 2012 there have been at least 19 near misses recorded at the Webb Street level crossing.

The elevated rail design takes into consideration the area’s unique set of characteristics and includes improved connections within the Narre Warren precinct by featuring a more integrated transport hub.

The modern Narre Warren Station will have two new elevated platforms with access via lifts and stairs, and the platforms will feature improved shelter and lighting.

The station will be safer and more accessible with modern facilities such as additional bus stops, shared use paths, Parkiteer cages and bicycle parking hoops, and landscaping throughout the station precinct.

Victoria’s Minister for Transport Infrastructure Jacinta Allan the level crossing was one of the most dangerous and congested level crossings on the Pakenham line.

“Our investment will transform Melbourne’s busiest train line, making journeys on the Pakenham line faster and local roads safer. We have 10 more to go by 2025 to make the Pakenham line level crossing free, with 12 already a thing of the past’” she said.

The Webb Street level crossing was one the additional sites added to the list last year, bringing the Victorian Government’s target of level crossings to be removed by 2025 to 85 from an earlier plan of removing 75.  The xtra crossing removals will make the Cranbourne/Pakenham and Lilydale lines level crossing-free.

Construction on the project is scheduled to start later this year and will be completed by 2025.