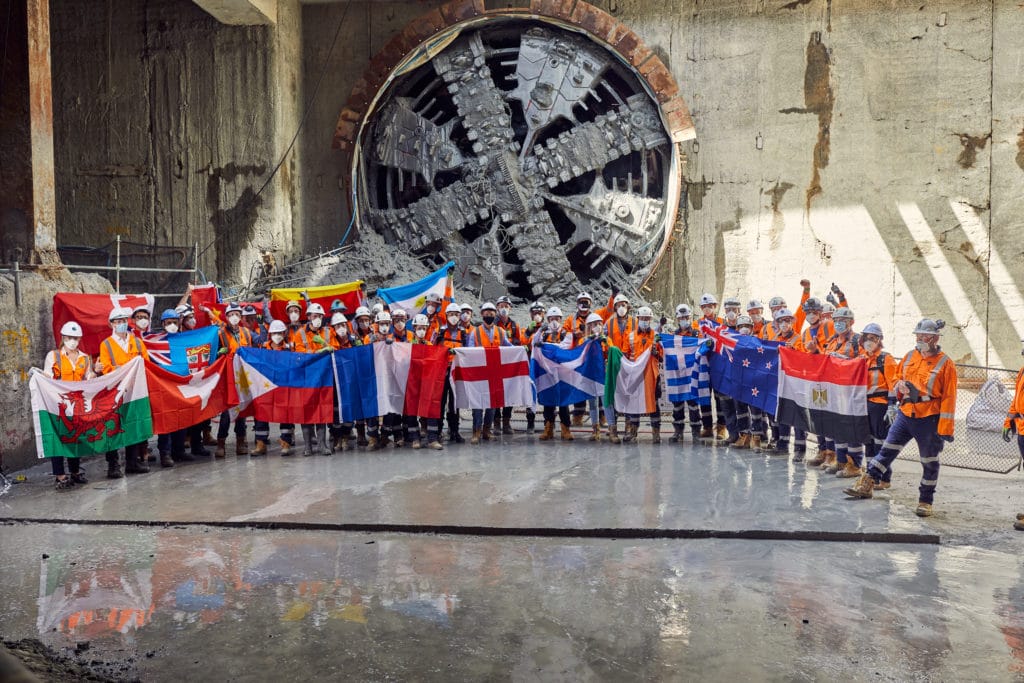 City Rail Link’s Tunnel Boring Machine (TBM), Dame Whina Cooper, broke through into the Aotea Station in central Auckland today, marking the end of its epic underground journey for the project and for the city.

City Rail Link Chief Executive Sean Sweeney said the aim was always to get into central Auckland before Christmas.

“And here we are – pleased and proud at what a committed Link Alliance team of contractors has achieved in some pretty testing times. It’s been a hard year but a better rail network for an international city like Auckland is getting closer,” he said.

Transport Minister Michael Wood, Auckland Mayor Phil Goff,  and CRL workers welcomed the TBM as it cut through a concrete protective wall into Aotea at the end of tunnelling that had started at Mt Eden in May.

“It’s great to see Dame Whina Cooper finish its journey – a positive milestone that is an exciting Christmas delivery for Auckland,” Wood said. “CRL will form the heart of linked-up high-capacity rapid transit network for the city.”

Sweeney described the breakthrough as the “icing on CRL’s Christmas cake” after a year of significant advances – re-opening the city’s restored Chief Post Office, connecting Aotea to the Albert Street section of tunnels, mining New Zealand’s deepest station at Karangahape, re-locating the huge Huia 2 watermain at Mt Eden, and navigating through a COVID pandemic.

“This breakthrough is a great morale booster for a dedicated team working at times under stressful conditions. It gives us great confidence going into the second half of the project next year,” he said.

“COVID is responsible for a lot of disruption. CRL Ltd and the Link Alliance are now assessing the impact of that disruption on construction timetables and costs. We’ll have a clearer picture next year. What is important today is that the Link Alliance has progressed a vital piece of Auckland’s transport infrastructure.”

During its seven month-long journey, the TBM multi-tasked – cutting into the earth, removing spoil to the surface, and installing the concrete panels that line the tunnels.

Following centuries-old mining tradition, the TBM’s name recognises a woman of significance and mana – for CRL it is Dame Whina Cooper. Today’s breakthrough occurred less than a fortnight after the Māori champion’s day of birth in 1895.

Dame Whina’s son, Joseph, says the breakthrough reflects in many ways the impact his mother made on Māori and all people living in New Zealand/Aotearoa.

“Kite matau nga iwi te kopura marama i tera moka o Te Kauhanga Raro – we the people can see the light at the end of the underground sacred passageway,” he said.

The breakthrough marks the end of the first of two underground journeys for Dame Whina Cooper.

The front section, known as the shield, will be lifted out in sections and transported back to Mt Eden.  The shield’s supporting sections, or gantries, will move back through the newly excavated tunnel to Mt Eden and reconnected with the shield for the TBM’s second drive to Aotea next year.

A completed CRL connects a redeveloped Mt Eden station directly with Auckland’s main station at Britomart. Two underground stations along the 3.45-kilometre route – Aotea and Karangahape – will make it easier to access the central city for work and pleasure.