Loram is expanding its innovative solutions in track and below rail maintenance in Australia.

In late 2019, global railway maintenance equipment and services provider Loram Maintenance of Way, Inc. significantly grew its contract services operations in the Australian railway industry with its purchase of Aurizon’s rail grinding business and its fleet of Loram rail grinders.

Although Loram and its advanced equipment has serviced Australian railways for over 50 years, its increased scale is enabling its Australian-led operations
to draw on its global range of track maintenance solutions, Tom Smith, director business development, told Rail Express.

“Loram has a 122 year history and what it’s rail maintenance service division is best known for is rail grinding but we have a portfolio of other products. Now that we’ve made this acquisition and with our base here, we are now in the process of introducing our other products that have had a lot of success in North America and other parts of the world to Australia.”

Having cemented itself as a market leader in North America, and with global expansion underway in its establishment of a UK-based subsidiary, and now Brisbane headquarters for Australasia and sub-Saharan Africa, Loram is taking its reputation for dependable and productive rail grinding service and combining that with product innovation.

“Loram has experienced significant growth over the years, attributable to keeping a customer focus. Loram wants the railways to be successful using Loram services and equipment – our customers have come to trust Loram. When we finish our grinding, they know the rail is going to be improved and they receive useful reports that show the results and improvement of the rail,” said Smith.

“We are constantly in communication with our customers. They often come to us with a problem and Loram is here to develop solutions. New developments are almost always driven by our customers and the needs that they have.” 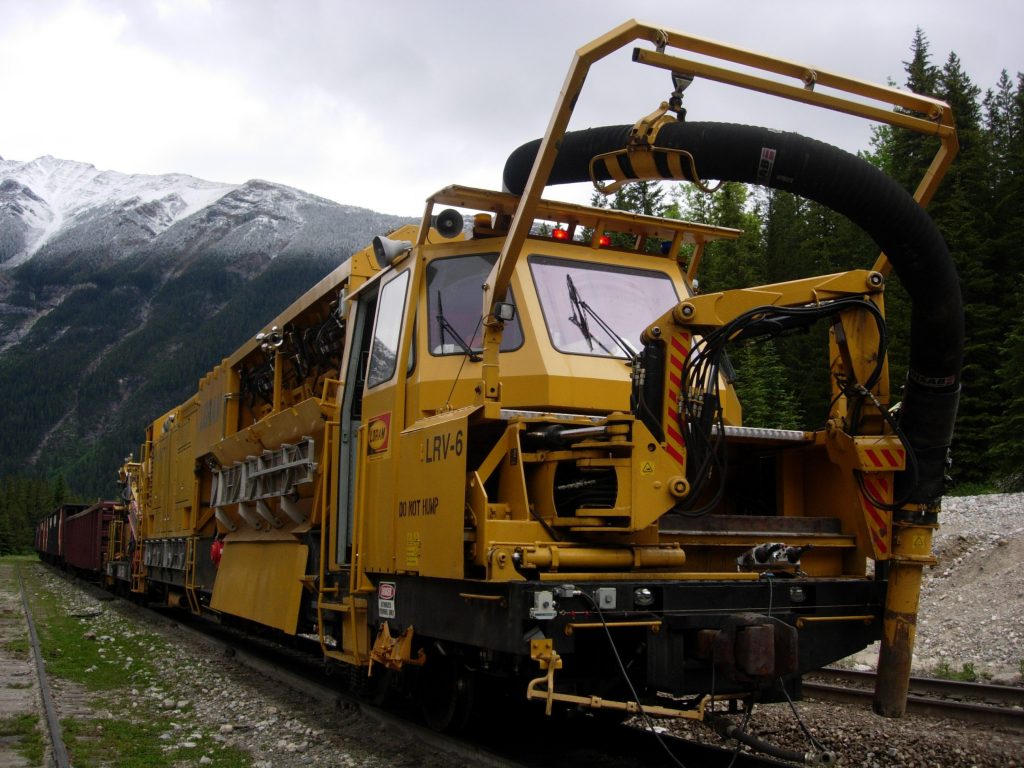 RAILVAC
One example of where Loram has worked to provide a unique solution is with its Railvac excavator. Already in use across North America, Brazil and Europe, the excavation machine combines a powerful articulated arm to breakup compacted material with extremely strong vacuum pumps to remove ballast, clay, mud, water, sand, and soil. The machines have proven their value to railway infrastructure owners and network operators.

“The first Railvac we came up with went to work on a demo. It was supposed to be there 30 days and never left, it’s still on that same railway after nearly 20 years,” said Smith.

What distinguishes the operation of the Railvac is its versatility to work in places that traditional excavation equipment cannot, or has difficulty to complete in available track time. The machine can be used in applications varying from full section undercutting mainline mud spots, to removing all material in the ballast section right to the deck of bridges and tunnels, in yard clean-ups, along platforms, or around other obstacles and reconstruction.

“The Railvac is being used quite a bit in iron ore clean up at the ports and coal clean up at some power plants. It’s an excavating tool that finds limitless uses around a rail network,” said Smith. “Track windows keep shrinking for maintenance, if you don’t have the four to eight hours to go out and fully undercut a section or turnout you can perform work for just half an hour or the time available, clear to let trains run, return and get through the section or turnout in stages rather than all in one go.”

“The Railvac was first thought up because there was a need to remove the ballast without cutting through the cables buried underneath the track. Trying to do that with traditional equipment, even manually with a shovel, you’re going to tear up your cables. That was the first application and is still being used for that same purpose.”

Other areas where the Railvac has been put to use is removing spillage in grain yards and to clean up areas around car dumpers. What ties these uses together with its other applications is the ability for the Railvac to get into areas that would be otherwise inaccessible.

“It works in places that’ve never been able to be maintained with traditional equipment – along a platform, on a bridge deck – and rather than tear out the panels and scoop up the fouled material, very much disrupting the track, the work can be done in small chunks with the Railvac sucking up everything right down to the floor of a tunnel, or the deck of a bridge,” said Smith.

In one project, on an iron ore railway in Brazil, the excavator was used to fully clean out a tunnel that was otherwise inaccessible to traditional equipment.

“They had tunnels where there were significant speed restrictions due to little maintenance over 40-years, no drainage, just a bunch of broken-up ballast, mud and iron ore dust,” said Smith. “With lengthy tunnels, the excavation averaged about 25 cubic metres an hour. It took some time with the limited track windows, but at the end of the job there was water rushing out of the tunnels that had been dammed up inside.

“The track structure has been engineered to provide stability. Internally there was the understanding there was a serious mud problem, but they had no idea there was that much water dammed up. When you think of the heavier loads being hauled, similar to here in Australia, when the track shows signs of movement, track slip potential shows the importance of drainage. The study proved the advantages of using the Railvac as it provided the most efficient and effective solution as compared to the alternative options. Most important, now that the tunnel is properly draining and the track is performing as designed, the speed restrictions have been removed,” said Smith.

Currently, Loram is in the process of upgrading and modifying one of its existing Railvac designs for operations in Australia. 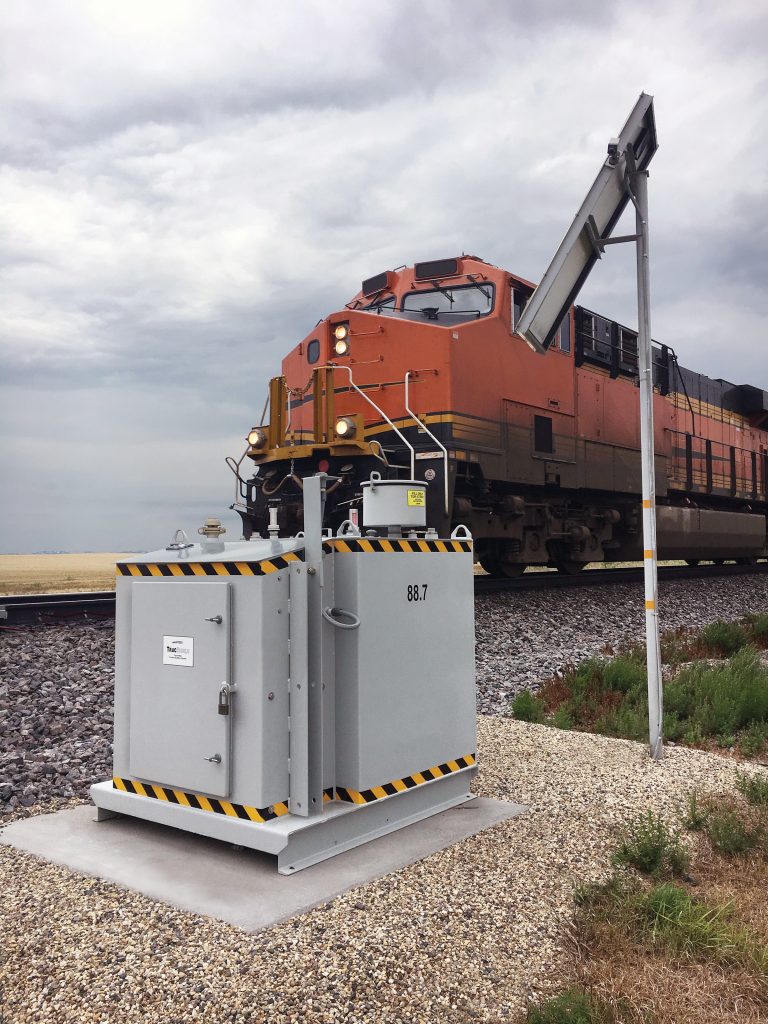 FRICTION MANAGEMENT
With 50-years’ experience in rail grinding, the rail-wheel interaction for extending rail life is well known to Loram. Optimising the rail life is also influenced with friction management.

Again, listening to customers’ needs, ten- years ago Loram acquired a small company specialising in friction management and has grown that to become a major supplier to the industry. Today, Loram is able to offer the next generation of friction management systems to Australia.

For decades, gauge face lubricators (Greasers) have been used to lubricate the gauge corner of rails in order to help the wheels roll through a curve, thus reducing gauge-face wear and extending rail life, as Smith explains. Noise reduction is also important through metropolitan areas, a calculated combination of top-of-rail friction modification and gauge-face lubrication can assist in this.

Not stopping there, in addition to the traditional gauge-face lubrication, Loram helped spearhead heavy-haul railroads’ system centric implementation of top- of-rail friction modification program as a solution to reduce fuel usage and reduce rail wear. Smith, who himself has a 40-year history within Loram – starting in the rail grinding operations department – and speaks with railways around the world, understands how valuable saving fuel can be.

“Fuel is often one of the biggest operating expenses a railway has these days and it is easily quantifiable with Australian heavy haul traffic.”

“The top-of- rail (TOR) friction management is really where a big cost savings for railways can be realised. Unlike grease, the TOR friction modifier are specially designed such that when applied in very small amounts, the modifier is carried by the train wheels for up to seven kilometres. Loram’s TOR modifiers do not affect tractive effort or braking conditions of a train. The traffic and track conditions are analysed and the modifier is strategically applied in very small amounts, maybe every third or even sixth wheel.

“The fuel savings are tremendous.”

In tests conducted by Loram’s customers, savings of seven per cent on fuel have been observed when using Loram’s top-of-rail friction modifiers.

Already, thousands of units have been installed or converted to use Loram’s modifier and greases across North America in the 10 years since Loram has started selling this range of products.

The friction management range comprises three types of top of rail friction modifiers and two types of greases. Friction modifiers consist of a water-based, synthetic, and hybrid modifier and two heavy-haul greases where one has an ECO certification. These are then applied with Loram’s range of application systems and backed up by Loram’s service offering.

Smith highlighted the experience and knowledge that the Loram’s team has in servicing and maintaining any type of brand of lubricators. Proper maintenance and unit up-time is key to maximising investment. The team understands that it’s not just about equipment, consumables and parts, it’s the unique combination of all three categories coupled with field maintenance that provides the winning ROI to its customers. There are many companies that claim to understand this, but Loram live this day in and day out. Each customer has unique operating parameters and as such friction management is not a ‘one size fits all’ application.

With decades of experience in the production of friction management systems, all the way from research and development, through manufacturing, installation, field service and maintenance to analysis, Loram expects to continue to innovate in this field, both in response to the emerging needs of its customers globally and locally in Australia.