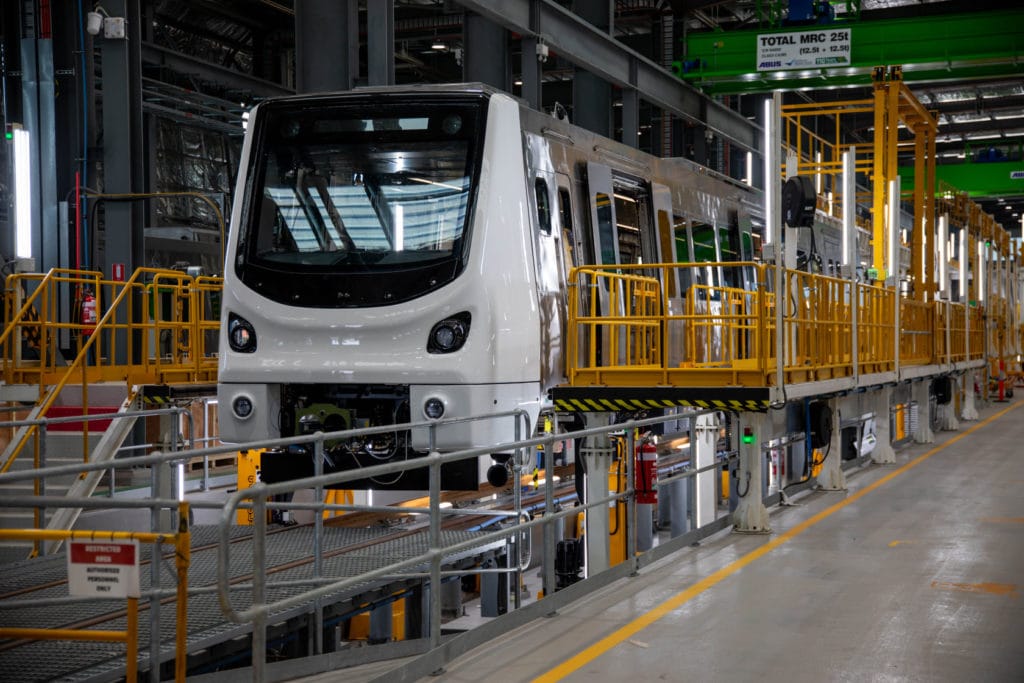 The first C-Series railcar built in WA at the METRONET Bellevue Railcar Manufacturing and Assembly Facility has rolled into the next stage of production, and is undergoing testing at the newly completed High Voltage Testing and Commissioning Facility.

This is the first time a railcar has ever been tested in WA, with the previous B-Series railcars bought from Queensland under the former State Government, and deployed directly onto the network.

After passing a series of static diagnostic tests, the railcar, manufactured by Alstom, will get its final touches including installing seating, passenger information systems and external livery.

Six railcars will then be joined together to create the first train to roll onto the network later this year for nine months of intensive trials along the Mandurah and Joondalup lines.

This rigorous testing program ensures the future railcars can help move the more than 103,000 daily boardings on these lines as safely, efficiently and smoothly as possible.

The WA Railcar program is delivering 246 new C-Series Railcars and six new Australind rail cars over a 10-year contract, with more than 130 workers currently employed at the Bellevue workshop.

The project is on track to deliver its 50 percent local content commitment with more than 15 WA businesses currently delivering new components for the railcars, including:

The facility’s assembly line set-up allows for different components to be installed as each railcar moves through five workstations. Windows, doors, floors, and ceilings are among the first to be installed on each railcar, followed by the underframe and roof equipment.

Premier Mark McGowan said theproject was “about railcars made by Western Australians, right here in WA”.

“Congratulations to everyone who has been involved in this major achievement for WA,” he said.

“My Government is delivering on our commitment, to diversify our economy, return rail car manufacturing to WA, creating a pipeline of work and jobs for Western Australia.

“On behalf of WA, I am proud Western Australian workers are being recognised for their craft, ability and skills in manufacturing, which will be seen rolling off the production line and onto the network in due course.”

Transport Minister Rita Saffioti said the Government had brought back railcar manufacturing to WA for the first time since 1994.

“We’re delivering on our promise to build our trains in WA with local workers, creating greater capacity and capability locally,” she said.

“Another milestone has now been reached with the first six railcars now being built right here in WA to create our first C-Series train; they need to go under significant testing before they can take passengers, but this is a great achievement.

“The METRONET Bellevue Railcar Manufacturing Facility was the first METRONET project to be completed, and shortly we will be seeing the first completed train built in WA on our rail network.

“It is incredibly exciting to see this facility take shape and our brand new railcars being built in WA.”

The State Government’s METRONET program is tracking along with 15 projects under construction, completed, in procurement or planning.

More than 10,400 workers have been employed across all METRONET projects under delivery, with projects like Morley-Ellenbrook expected to ramp up over the remainder of this year and contracts additional projects to be signed later this year, creating thousands of additional jobs.

This includes more than 230 apprentices and trainees, with 51 per cent of total expenditure across the projects spent on WA businesses to date.