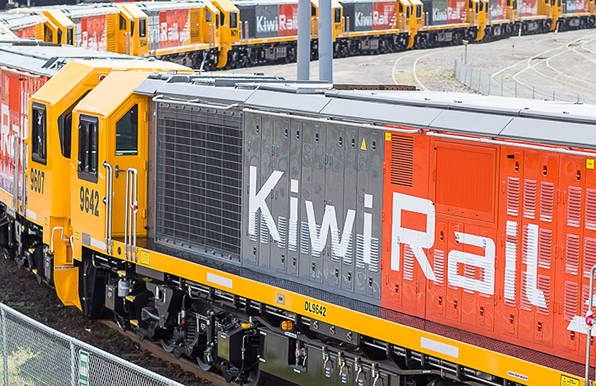 Railways between Australia and New Zealand provide an interesting contrast. During the 1870s, New Zealand was able to move from three gauges to a uniform (narrow) gauge; this in part assisted by the abolition of the provincial governments in the mid 1870s. To this day, Australia continues to bear the additional costs imposed by three different rail gauges. This in part is due to various less than helpful actions over the years by some state governments.

Over many decades, New Zealand Railways (now called KiwiRail) has demonstrated rail innovations well ahead of Australia. By way of example, Centralized Traffic Control (CTC) is used to remotely control electrically-operated signals and points on single track and was first used in New Zealand in 1938. CTC started in Australia in 1958.

By 1966 CTC was operating over most of the North Island Main Trunk (NIMT) line linking New Zealand’s two largest cities; Auckland and Wellington. It took a further 42 years for CTC to be operating on all single-track sections between Melbourne, Sydney and Brisbane, in 2008.

About one hundred years ago, to ease steep grades on the track between Albury and Sydney for steam locomotives, a series of deviations were built at the expense of extra distance and many tight radius curves. However, some deviations built on the NIMT to ease grades also led to a reduction of both distance and curvature.

In addition, the 1980s offer of the Australian Government to help electrify the Sydney Melbourne railway was declined by the NSW and Victorian state governments. In New Zealand, most of the NIMT was electrified during the 1980s with bipartisan support.

New Zealand privatized its rail system in 1993, but after many problems the government “took back the track” in 2004. The ‘above rail’ and ferry operations then were taken back by the  Labour Government in 2008. This move was not reversed when the New Zealand Ggovernment changed later that year from Labour to National to National.

In a similar way, carbon pricing introduced in New Zealand, by the Labour government was not reversed by the new Government. It remains in place to this day.

It is in road pricing that New Zealand has made real progress while Australia has not. By 1977, most states in Australia had deregulated land freight whilst not adjusting road user charges for trucks. This led to freight moving from rail to road, with many more ‘loads on roads’ with adverse road safety impacts. The New Zealand government avoided this costly situation by introducing a system of mass-distance charges for all heavy vehicles.

If one accepts that the long standing New Zealand mass distance charges for heavy trucks are user pays, then the annual hidden subsidy to road freight in Australia amounts to over $2 billion per year.   This is a recipe for less freight on rail along with more ‘loads on roads’.  Other road freight external costs of road trauma, emissions, noise and road congestion are in the order of a further $2 billion per year, which far exceeds rail freight external costs.

As far back as 2002, the Australian Transport Council  (ATC) of  federal,  state and territory transport ministers called for a plan that included, within ten years, “programs that encourage people to take fewer trips by car” and a shift “from predominantly fixed to predominantly variable costs” to “ensure that transport users experience more of the true cost of their travel choices”.

It is now 2021 where fuel excise, after indexation was paused between 2001 and 2014 is 42.7 cents per litre. Had of CPI indexation not been paused by the Howard Government, fuel excise would have been 60 cents per litre by 2018-19. The difference, applied to about 16 billion litres of petrol consumption that fiscal year would be about $2.77 billion. There is a similar amount for diesel used by road vehicles.

By way of contrast, the New Zealand government has effectively adopted the ATC recommended approach for many years. Petrol excise in New Zealand is now 70.024 cents per litre (plus GST and in Auckland, a further ten cents per litre). The revenue from fuel excise for cars and mass distance charges for trucks goes to a National Land Transport Fund for roads and alternatives to roads, such as rail, public transport and cycle ways.  A further six cents per litre is imposed in government on petrol for road accident compensation.

The result is that fixed annual charges for cars in government are much lower than registration and third party third-party insurance premiums in Australia  (for example, for a car with a one tonne tare mass, the annual charges are about $NZ109 in New Zealand and $650 in NSW).

Dr Philip Laird OAM is an Honorary Principal Fellow at the University of Wollongong and a graduate of Victoria University of Wellington, the Australian National University and the University of Calgary in Canada.  He is a Fellow of the Chartered Institute of Logistics and Transport and a Life Member of the Railway Technical Society of Australasia.