The 29th International Railway Safety Council (IRSC) conference, jointly organised by the Rail Industry Safety and Standards Board (RISSB), the Office of the National Rail Safety Regulator (ONRSR), and the Australian Transport Safety Bureau (ATSB) was an outstanding success.

Themed Innovation and Technology: Changing the Future of Rail Safety, the conference attracted more than 220 attendees from over 20 countries to Perth.

Delegates representing government, regulators, operators, network managers, investigators, and suppliers from across Australia and overseas were inspired by speakers who highlighted current practices in their region and encouraged conference attendees to push through barriers to innovation and embrace new technologies.

With presentations ranging from rail safety and the fourth industrial revolution, digital train control and virtual certification, to risk analysis methodology and equipment safety and compliance management, the range of topics and presenters reflected the diverse interests of everyone attending the conference.  In addition to stakeholder meetings, and keynote presentations, this year’s conference featured plenty of networking opportunities for attendees and partners alike.

Following an informal welcome reception at the City of Perth Surf Life Saving Club on Sunday, 13 October which included a performance by the Wadambah Dance Group, the conference was officially opened on Monday, 14 October with a welcome speech by RISSB’s Executive Chair and Chief Executive Officer, Deborah Spring. As part of this speech, Deborah highlighted how Standards can promote and enhance innovation as well as improve safety and drive efficiency.

After Deborah’s opening speech, topics ranging from digital transformation of the rail sector, risk analysis methodology, rail safety and the fourth industrial revolution, to operational and financial management, were discussed during the day.

Kay Doyle and Cathal Mangan from Iarnród Eireann / Irish Rail opened the day’s first session on Demonstrating Safety in New Technology with a presentation on Digitalisation Reducing Risk in Irish Rail sharing their experiences in effectively capturing historical information and retaining corporate knowledge before it’s lost in the sands of time. Frédéric Delorme from SNCF, France then pushed delegates’ thinking on rail safety and the fourth industrial revolution.

The conference then changed sub-theme to Don’t Save Yourself into Trouble where industry experts Dr Peaceman Sopazi, from the Railway Safety Regulator, South Africa; Frédéric Henon from SNCF, France; and Tian Jun, from the NRA, P. R. China outlined the tension between operational demands and financial constraints and how to address these to ensure proper funding for safety.

The first day of the annual conference concluded with a gala dinner at Sandalford Wines at Caversham. Visitors were given the chance to pat a koala and kangaroo, as well as listen to an Australian bush band. The keynote speaker, Naomi Frauenfelder, Executive Director of TrackSafe, gave a moving speech on the importance of focusing on the mental wellbeing of employees to drive a safety culture.

Nat Nagy of ATSB opened Day 2 of the conference with a safety thought, challenging delegates to maintain a “restless vigilance” in regards to safety. 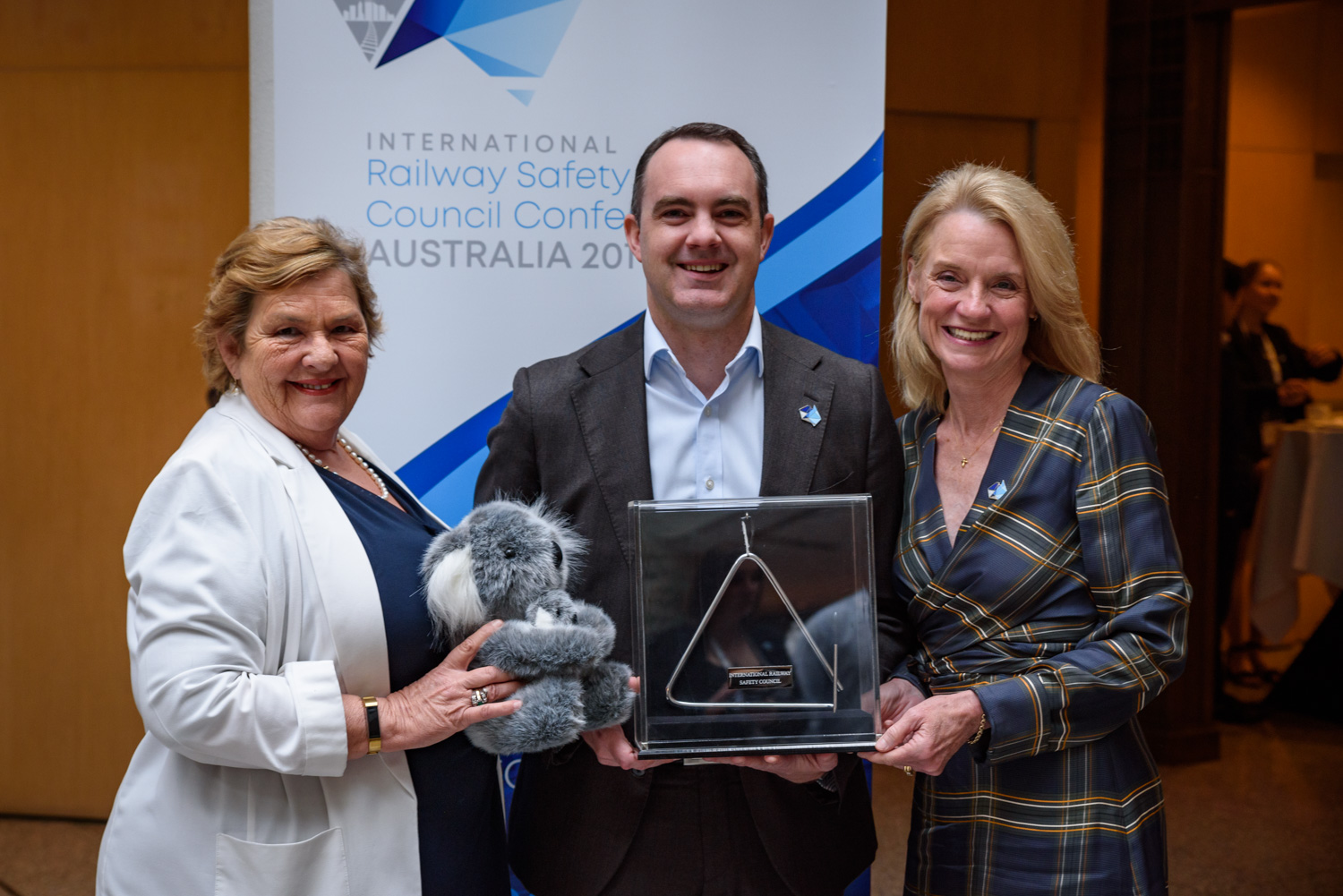 Day 2 presentations commenced with Sue McCarrey, Australia’s National Rail Safety Regulator addressing the sub-theme Demonstrating Safety in New Technology and providing a regional perspective on regulation and innovation to a global safety conversation. Bringing insights from the other side of the world, Allan Spence from Network Rail, challenged conventional notions of a robust safety management system and the need to get behind the KPI numbers to understand what is really happening – a poignant and powerful presentation which earnt him the Best Presentation Award at the conference.  Rounding out the remainder of the morning were presentations by Laurent Cebulski from EPSF, France and KC Cheung from Hong Kong SAR Government.

A highlight of the morning’s agenda was a presentation by the Honourable Rita Saffioti. Western Australia’s Minister for Transport; Planning. Rita spoke with passion about the extensive range of rail initiatives in Western Australia, encompassing passenger rail networks including METRONET and its long-term blueprint and freight rail networks including enhanced connection to ports.

The day continued with afternoon presentations based on three sub-themes:

Talks focused on how the global rail industry is pushing technological boundaries to create safer and smarter transport practices.

Day 2 produced our winner for the Best Paper Award which went to Rodrigo and Corby for their paper entitled The Sixth Sensor: How IoT Smart Sensors Can Address Operational Challenges Introduced by Increasing Automation in Railways; a very thought-provoking presentation showing that there are still some very clever solutions to some of the rail industry’s most fundamental modernisation problems.

The final day of the conference was devoted to sub-themes Risk Management and Assurance and Demonstrating Safety in New Technology. Presentations took a deep dive into how the digital rail revolution has brought with it new opportunities as well as fresh challenges. Challenges that require organisations to focus on culture, process, people and the application of new technology.

This topic was further explored by keynote speaker Captain David Evans who was the check captain on board flight QF32 which suffered an “uncontained engine failure” resulting in serious damage to the almost brand new A380. Captain David Evans was very much part of the drama as it unfolded. Drawing on an extraordinary turn of events, David shared his personal journey as a Captain who also experienced the shock of finding himself in a potentially fatal circumstance, reminding all delegates that when things go wrong, nothing can replace the human in helping us to make the right decisions.

The IRSC delegates appreciated the efforts that Mr Toshiyuki Murai and Mr Makoto Kato from JREU, Japan made in attending the conference, given the devastation caused by Typhoon Hagibis.

Kirby Jang, IRSC Acting Secretary, provided an update on the Core Group meeting held on the evening of Day 2 of the conference, highlighting that key outcomes included endorsement of a new leadership and governance model and selection of hosts for future IRSC conferences. 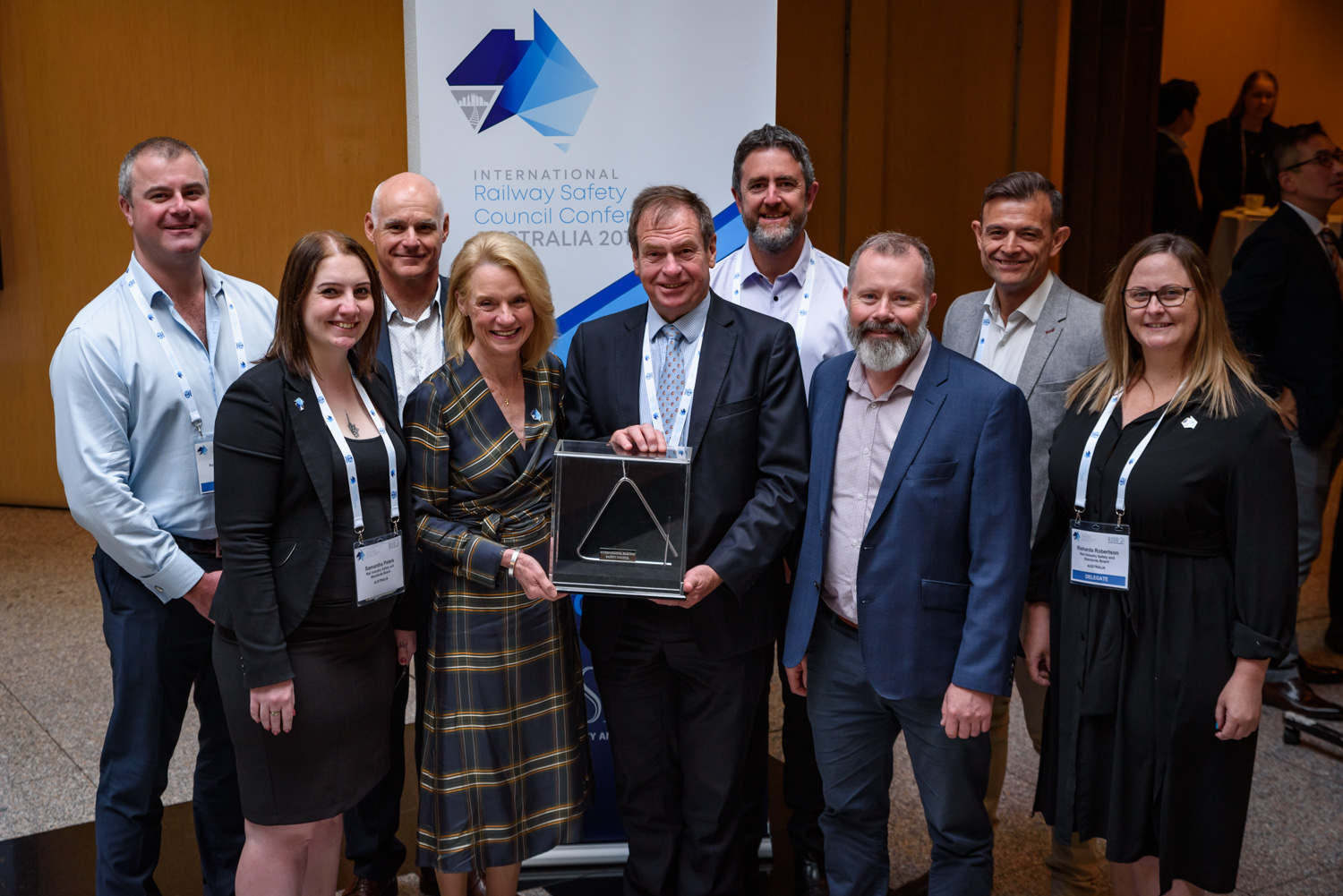 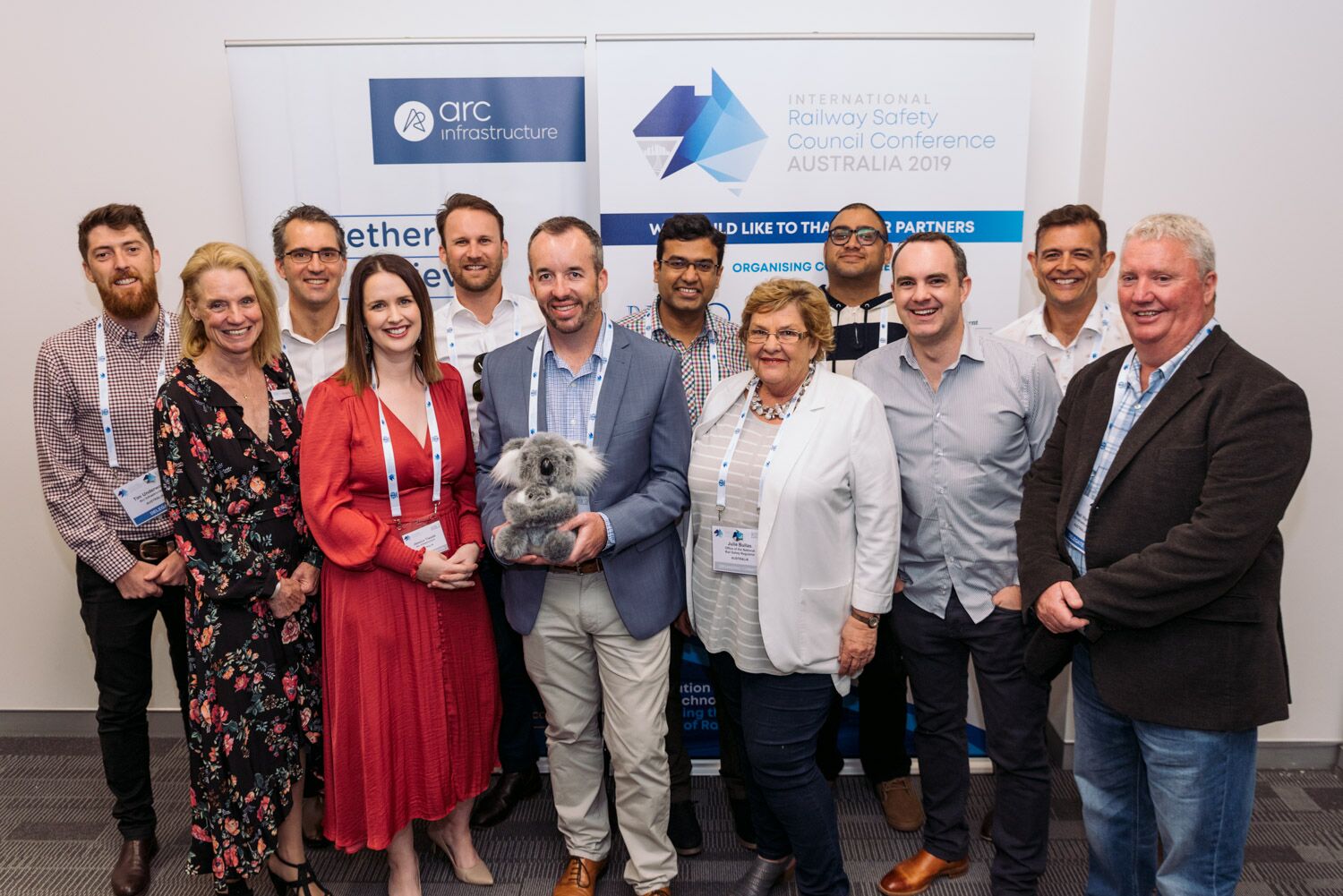 Concluding the conference, was a handover ceremony during which time Glasgow was revealed as the 2020 host city for the 30th IRSC which will be hosted by the Rail Safety Standards Board (RSSB), Office of the Rail Regulator (ORR), and Network Rail.

Overall, the conference was a huge success with attendees walking away from it challenged with new ideas on how innovation and technology is changing the future of rail safety and plenty to discuss including intelligent systems, artificial intelligence, and assurance and regulation with new connections made.

Thank you to everyone who helped to make this year’s conference a success including the 29th IRSC organising committee of Deborah Spring (RISSB), Julie Bullas (ONRSR) and Nat Nagy (ATSB), and conference delegates for participating and sharing knowledge in the rail safety conversation.

The presentations and papers from the 29th IRSC will be made available on the following websites: www.international-railway-safety-council.com and www.rissb.com.au in the near future. RISSB will also be working with presenters to create webinars.

On behalf of the 29th IRSC organising committee and next year’s hosts, we invite you to join us at the next IRSC conference in Glasgow in October 2020. 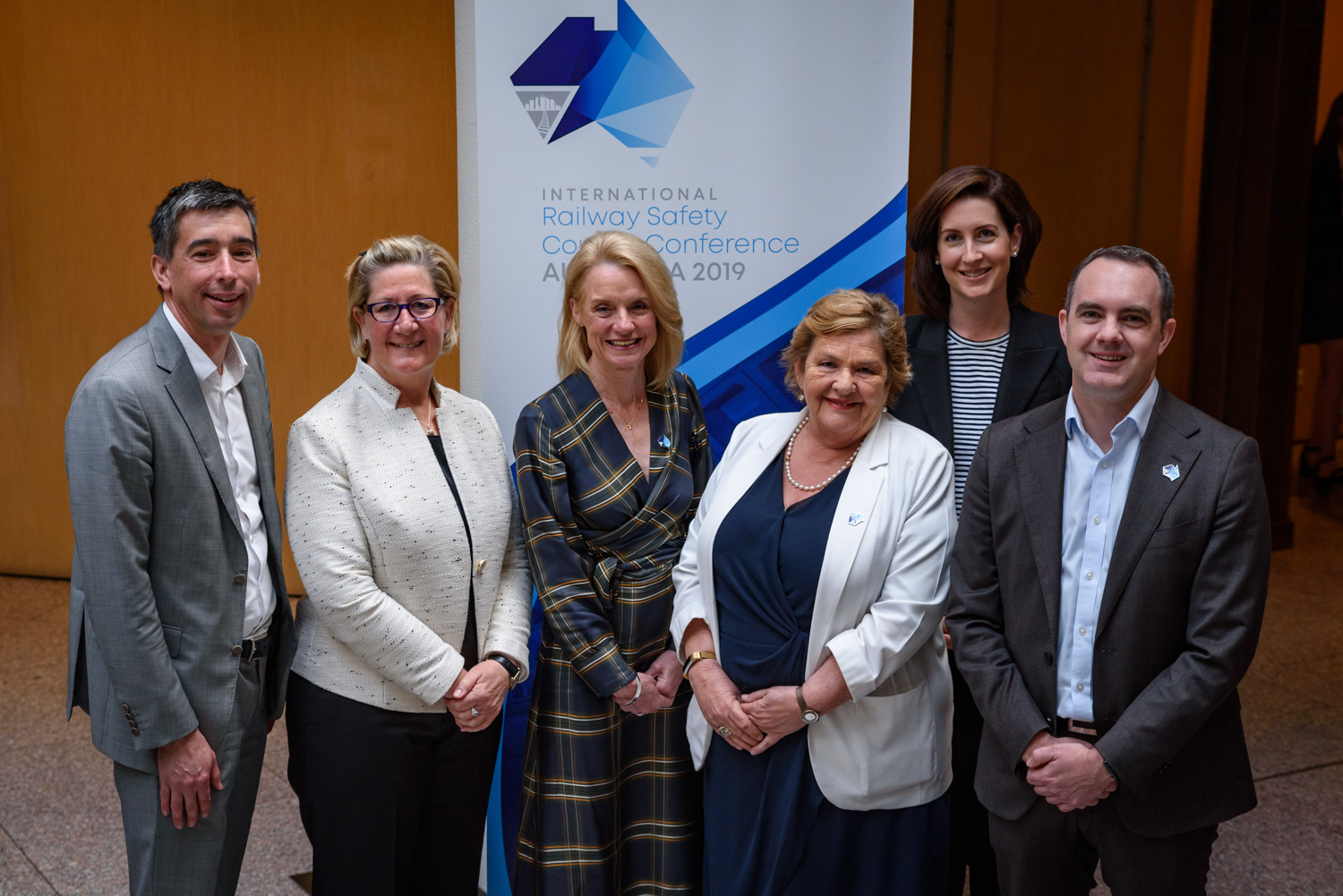